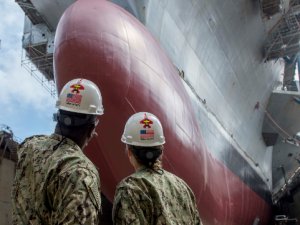 The U.S. Navy has confirmed that a "small number" of sailors aboard the carrier USS George H.W. Bush have tested positive for COVID-19.

The affected individuals have been isolated in shoreside housing and are receiving regular medical care until they recover, according to the Navy.

USS Bush has been undergoing maintenance at Norfolk Naval Shipyard (NNSY) for the past year and a half, and she is not scheduled to sail again until next year. The outbreak is not expected to affect operations.

Norfolk and the broader Hampton Roads region have experienced a rising number of coronavirus cases in recent weeks. The city of Norfolk reported 143 new cases Thursday, bringing its total to more than 3,000 over the course of the pandemic.

Carriers are densely populated, compartmentalized vessels, and like other ships with these characteristics they have proven vulnerable to rapidly-spreading COVID outbreaks. The French Navy carrier Charles de Gaulle experienced a coronavirus outbreak during exercises in the North Sea in April, and more than 1,000 members of her crew (about two-thirds of those on board) ultimately tested positive. The USS Theodore Roosevelt sustained a COVID outbreak after a port call in Vietnam, and 1,150 out of her 4,800 crewmembers tested positive, forcing an extended disembarkation and quarantine period in Guam.

This news is a total 1724 time has been read
Tags: "Small Number" of COVID Cases Aboard Carrier USS George H.W. Bush