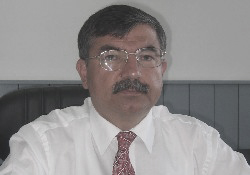 Minister of Transportation ?smet Y?lmaz said that Turkey is the 8th at ship building, and will be the 4th when the investments will be finished.

Minister of Transportation ?smet Y?lmaz said that Turkey is the 8th at ship building, and will be the 4th when the investments will be finished.

Minister ?smet Y?lmaz joined to the groundbreaking ceremony at shipyard, which belongs to Gündo?du Companies Group in Karasu-Sakarya. Before the ceremony a couple of people protested the ceremony and said: "Please Minister don’t lay the foundation, don’t kill the Karasu Beach."

Minister Y?lmaz who talked at the opening, said that he found ship building industry similar to industry without chimney, prejudgments about shipyards are wrong. Between 2002 and 2006, shipbuilding industry increased percent 90 and in Turkey this range was percent 360. He continued: "Ship building industry provides employment for a million people. In 2006 the ships built in our country was exported. Most of these are to Europe our shipyards are so busy and there will be no order accepted until 2015."

In his speech Minister talked to people who protest the shipbuilding construction: "At shipbuilding Korea is the first and Japan follows it, we product half of Japan's production. Now i just ask you Japan or Germany which of them is more sensitive than Turkey? I want all our people to visit the shipyards in Korea; even you can see Ere?li Shipyard. In last years shipyard count increased to 60 for 30 and Turkish Shipbuilding grow percent 90. Turkey was at the 23. place in the list, now we are the 8th at ship building, but our investments continue, when they completed we will be the 4th. In that time we will be building ships in real meaning."

The shipyard, which will be established at Karasu Yenimahalle coast and at the width 12 thousand metric, is planned to be completed with approximately 20 million dollars. In 2008 first part will be completed, then in 2008 first ship will be launched and until 2008, 500 people will be employed after the ceremony, it was laid foundation with hopes."

This news is a total 958 time has been read