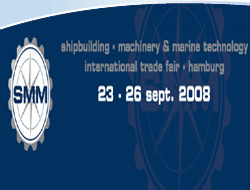 Shipbuilding industry fair SMM 2008, to be held from 23 to 26 September 2008, includes numerous congresses, conferences, workshops, panel discussions, meetings and official receptions to the more than 47,000 trade visitors expected from all over the world

The whole shipping industry over the world cares for this fair

Shipbuilding industry fair SMM 2008, to be held from 23 to 26 September 2008, includes numerous congresses, conferences, workshops, panel discussions, meetings and official receptions to the more than 47,000 trade visitors expected from all over the world.

In total, there will be more than 1,800 companies, from 55 countries including Turkey, as well as international associations and institutions. Many companies under the presidency of Turkey Chamber of Shipping took part at fair.

As well as economic and shipbuilding policy subjects, energy saving technologies and climate and environmental protection will be the centre of attention at SMM 2008.

These subjects were apparent on the eve of the first fair day, when Michael Glos, the German Federal Minister of Economics and Technology, formally opened SMM 2008 at 19.00 in the CCH-Congress Center Hamburg.

On the occasion of the SMM, Antonio Tajani, Vice President of the European Commission, and with responsibility for transport, Ole von Beust, President of the Hamburg Senate and First Mayor of Hamburg, and Dr. Corrado Antonini, Honorary Chairman of the Community of European Shipyards' Associations (CESA) have spoken to the more than 500 invited guests.

In the light of the turbulence in the international finance markets, the Ship Finance Forum, took place on 22 September 2008 was of particular interest. Experts from the world of finance and from the shipbuilding and shipping industry discussed the current and future challenges of the market.

A particular highlight during SMM 2008 will be the first international conference on "Maritime Security and Defence" (MS&D), which takes place on 24 and 25 September 2008 at the Hamburg Fair site, Conference A, Hall 1.

Speakers from the operations staff of numerous navies, including the British Royal Navy, the French, German and Malaysian navies, together with experts from the security industry and scientists will examine the growing threat to shipping and ports due to piracy and armed robberies, and the danger of terrorist attacks.

The conference is the forerunner of next year's first international congress with accompanying "Maritime Security & Defence 2009" (MS&D 2009) trade fair - organised by the Hamburg Fair - which takes place from 6 to 8 October 2009 at the Hamburg Fair site.

The "Environment and Innovation" workshop, which took place from 11.30h to 13.30h on Tuesday 23 September in Conference A, Hall 1 at SMM 2008, organised by the German Federal Ministry of Economics and Technology (BMWi) and the CESA, the umbrella organisation for European shipbuilders, in cooperation with the Hamburg Fair, explained that environmental protection is not a brake on development, but rather the result of technical inventive genius. Dagmar G. Wöhrl, Parliamentary State Secretary at the Federal Ministry of Economics and Technology (BMWi) and German Government Coordinator for the Maritime Industry, have opened the event.

The Chairman of the European Community of Shipbuilders' Associations (CESA), Kommer Damen, and the President of the European Marine Equipment Council (EMEC), Jaakko Eskola, also took part in the event. The workshop focused on shipyards, shipbuilding suppliers, ship owners, politics and science.

The request for technical solutions for economic and low-emission ship transportation should be answered by the discussion on 25 September, in Hall B3, 14.00h - 16.00h, Conference B, Hall 1 - 3 (formerly the Copenhagen Hall). Fred Deichmann, Columbus Shipmanagement GmbH, Hamburg, will manage the event. Registration at the CIMAC website.

Market- and environmentally-compatible developments of this kind can only be implemented by competent engineers. But these are rare. So, for those maritime companies under innovation pressure, the "ThinkING" recruitment advertising promotion comes at just the right time.

The promotion will take place on Thursday 25 September, 13.30h to 17.00h, and Friday 26 September, 11.00h to 16.00h. At the fair, schoolchildren and their teachers will be offered a programme lasting around 4 hours, during which, as well as a talk and a shipbuilding-related quiz, a guided tour of the fair in small groups is planned as well.

This news is a total 632 time has been read