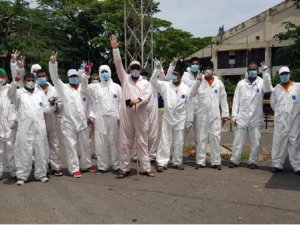 Soaring crew change costs in India are discouraging shipowners and managers from carrying out this task as seafarers pile up pressure to be relieved after spending time at sea much beyond their contract period.

Vessels are having to deviate from their normal route to discharge cargo at southern Indian ports like Cochin, where the greed of agents has gone through the roof.

Agents providing crew change services were seen charging as much as $100,000 dollars to cash in on the situation in April, when crew changes involved Covid testing, isolation and quarantine, e-permits for transportation during a strict lockdown, and so forth. This amount, added to bunker and insurance costs for deviating to India from the normal route, would cost the shipowner another $150,000.

“In times of wafer-thin profit margins, such extra costs can be back-breaking. I know one shipowner who had to fork out $500,000 for a crew change in Cochin in early-April,” a prominent Indian shipowner said, on condition of anonymity. Fortunately, these costs did come down in May and June due to competition among port agents.

The Directorate-General of Shipping (DGS) has estimated that 3,620 Indian seafarers would have lost their jobs to other nationalities on board ships between March 23 and June 30 as the lockdown restrictions derailed crew change plans both in India and overseas.