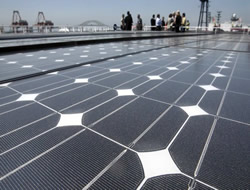 The M/V Auriga Leader sports 328 solar panels on its top deck, a small array that provides 10% of the energy used by the giant ship while she is docked.

The M/V Auriga Leader sports 328 solar panels on its top deck, a small array that provides 10% of the energy used by the giant ship while she is docked.

The huge car carrier ship called the M/V Auriga Leader idled at the Port of Long Beach, burning through enough electricity to power 100 homes as workers loaded and unloaded a fleet of Toyotas.

But unlike any of the diesel-spewing, power-draining vessels that travel here, the Auriga Leader sports 328 solar panels on its top deck -- a small array that provides 10% of the energy used by the giant ship while she is docked.

The ship -- part of a demonstration project by the Port of Long Beach, Toyota and Tokyo-based shipping company NYK Line -- is the first to use solar energy to help fill all of the vessel's power needs, rather than to run auxiliary lights or serve other small functions.

"This is the first ship to direct the solar power into the ship's main electrical grid," said Brian Mason, national manager of marine logistics and export for Toyota Motor Sales U.S.A. Inc. "It's helping all of the time, and its helping with everything, like the ship's thrusters and the hydraulics for the steering gear."

The practical effect is that the ship is burning less diesel fuel as its engines idle to power the ship's electrical systems. The ship's solar array can generate about 40 kilowatts or about enough power to run 10 average homes.

Port officials, under pressure to reduce air pollution from ships as they idle at the docks, welcomed the experiment.

"It's huge," said Alex H. Cherin, managing director of trade relations and port operations for the Port of Long Beach. "It means all of our efforts to get industry to help us are working."

Richard Steinke, the port's executive director, acknowledged that the facility had a long way to go before it could claim that it had substantially reduced diesel emissions. But he said the ship added one more element of clean technology to the port.

"From our standpoint, it's another positive step," Steinke said.

The shipping company is still evaluating how well the panels work, including whether they will hold up under the corrosive effects of salt sea air, said Fumihiko Shimizu, manager of the U.S. car carrier group for NYK Logistics and Megacarrier, an NYK subsidiary.

"We are still looking at the capabilities," Shimizu said. "Within a few years, we hope we can generate enough solar energy for the full 400 kilowatts the ship uses at port."

As today's ships go, the 60,000-ton Auriga Leader is fairly large at 665 feet in length. But it's also a fairly simple vessel in terms of what it needs to do once it arrives in port.

Its cargo of vehicles, parked and lashed down just 6 inches apart, are simply driven off the ship, which resembles a very large, multi-level parking garage when viewed from inside the ship. Other vessels are larger and more complex, and using alternative energy to power them would be more difficult, said Art Wong, a spokesman for the Port of Long Beach.

An "S-Class" ship designed to carry as many as 8,000 cargo containers can be 900 feet to 1,000 feet long. These vessels are also required to provide power to any number of refrigerated cargo containers carrying perishable items. On average, such ships can need as much as six megawatts of power, or enough to provide electricity to 4,000 homes, Wong said.

Crude oil supertankers need even more fuel. It takes eight megawatts of electricity -- enough to power about 5,500 homes -- to pump their cargo of oil off the ship, Wong said.

Port officials say that shows there is no single technology that is going to quickly reduce a ship's diesel emissions.

"This is a good step we're taking here to reduce these greenhouse gases," Wong said.

This news is a total 4327 time has been read