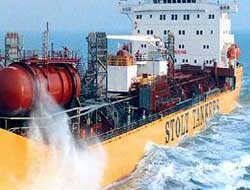 OSLO-listed international parcel tanker company Stolt-Nielsen brought in ?solid results? in Q1 according to its CEO Niels Stolt-Nielsen. Highlights for the first quarter of 2008, compared with the fourth quarter of 2007, included revenue of US$481.1m, up 4%, and operating profit of $54.6 million, up from $51.1 million in Q1 last year. However profit from continuing operations was $42.3 million, compared with $42.4 million.

Mr Stolt-Nielsen, Chief Executive Officer of SNSA, said: ?Stolt-Nielsen SA reported solid operating results in all divisions. Despite the uncertainty in global financial markets and a likely recession in the US, our markets remained relatively stable. SNSA"s results for the quarter were held down, however, by the impact of substantially higher operating costs,particularly fuel costs and manning expense. I believe our contract portfolio in tankers, combined with the steady cash flow from our terminal and tank container divisions and the historically profitable turbot business will continue to serve us well in an eventual weak global economy. I feel comfortable with the company"s balance sheet and its ability to finance its capital expenditure commitments over the next four years.?

This news is a total 1202 time has been read