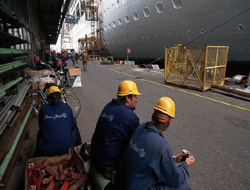 AK Party deputy Mehmet Domaç, the head of the parliamentary commission investigating the recent rash of work-related fatalities at shipyards in ?stanbul's Tuzla district, has said that the deadly accidents in Tuzla are rooted in years of neglect.

Justice and Development Party (AK Party( deputy Mehmet Domaç, the head of the parliamentary commission investigating the recent rash of work-related fatalities at shipyards in ?stanbul's Tuzla district, has said that the deadly accidents in Tuzla are rooted in years of neglect.

"As a commission, we have prepared a report after taking into consideration all the details and speaking with all sides involved. We have listed the preventative measures that need to be taken. At the base of this problem lies the very serious neglect of things that should have been done years ago. In order to arrive at a definitive solution to these things, all sides need to come together and focus on the problem at hand," he explained.

Speaking with Sunday's Zaman about the situation at the Tuzla shipyard, Domaç said if the measures listed in the report are actually implemented, the deaths at the shipyards will come to an end. Stressing the importance of all sides working together, commission head Domaç continued: "The problem has reached a worrisome level because people are so late in taking the measures that should have been taken long before. Before any more time is lost, all the concerned sides, including the shipyard employees, the employers, the subcontractors, various ministries, universities, educational institutions and technical schools, need to come together and work to straighten out this problem."

Domaç said that in the space of three months his parliamentary commission has held 14 meetings, listened to testimony from 55 people and carried out four on-site inspections. He noted that the commission's report was the culmination of all of this work.

Domaç also noted that there has been an increase in shipyards in Turkey, pointing out that while there were 37 shipyards in 2002, this number had risen to 84 by March 2008. By the year 2013, he said, this number is expected to have risen to 140. He added that the creation of new shipyards is not limited to Tuzla and that there are projects under way in cities across Turkey, such as Trabzon, Samsun, Ordu, Sakarya, Çanakkale, ?zmir and Adana to set up working shipyards.

While there are shipyard plans for cities outside of Tuzla, Domaç said currently 52 percent of Turkey's shipyards are located in Tuzla and that between 2002 and 2008 the ship construction sector had grown by 360 percent. He underscored the importance of Tuzla to the shipyard industry, noting that this district provides 75 percent of the total employment opportunities in the sector and 80 percent of the exports.

Analysis of the deaths that have taken place at the Tuzla shipyards over the past eight years reveals that 34 percent have been the result of falls from high places, 16.6 percent from electric shocks, 16.5 percent from accidents involving heavy equipment and 11 percent from explosions and other causes. Domaç said his commission's report listed suggestions for how to address structural problems, how to improve labor conditions and organizations, how to deal with union problems. It also detailed recommendations for better emergency preparedness.

Stressing the importance of the suggestions of the parliamentary commission, Domaç said: "If the precautions we list in our report are taken and implemented, not only will the deaths stop, but the health and safety conditions at the shipyards in Tuzla will be fixed. We really hope that these suggestions are put into action." He said it was essential that all of the suggestions be enacted, not just some of them.

He went on: "All of these suggestions need to be taken together. ? And, in order to quickly fix the problems in Tuzla, we need to create an 'arena' in Tuzla. It would be helpful to combine some of the smaller shipyards and create larger shipyard arenas."

Domaç also reserved criticism for the fact that different government ministries had tried to solve the problems in the shipyards independently of one another. Instead, Domaç said, it would be more helpful if one large roundtable where Tuzla's problems could be discussed and debated was formed.

In answer to the question of whether or not he was ready to speak with Prime Minister Recep Tayyip Erdo?an regarding the many problems facing the Tuzla shipyards, Domaç said his commission had decided to send a summary of its report to concerned ministries, noting: "Our prime minister has already had a meeting in ?stanbul with representatives of Tuzla shipyard employees. We will also talk about this in our commission. And, if the committee members find it appropriate, we will meet with the prime minister. The important thing here is just solving the problem."

Domaç characterized the increase in work-related shipyard deaths over the first six months of 2008 as worrisome, noting that it was the duty of Parliament to reveal the real reasons for these deadly accidents, as well as to work to eliminate them.

Reminded of criticism leveled by labor union leader Yüksel Ad?belli, who had previously demanded "As for the parliamentary research commission, what are they even researching? Domaç said: "The things that Parliament can do are clear. And our citizens know the responsibilities and duties of Parliament. On subjects that call for oversight, Parliament can carry out research and bring certain things to the daily agenda of Parliament's general assembly. And it can make regulatory changes, if necessary. As for the subject of precautions against work-related accidents in Tuzla, Parliament is fulfilling its duties in this area."

Noting that the commission's report had come only after the reading of around 1,500 pages of documents and projects, Domaç said: "When facing large problems, people quite naturally look to others as responsible for these problems. If there is not more cooperation and focusing on the solutions at hand by everyone involved, in the end, the laws will not work."

The suggestions from Parliament's commission on Tuzla are divided into sections on institutionalization, shipyards, side industries, employee health, work security and education.

The report underscores the negative impact that small and cramped work quarters are having on employee safety in Tuzla, suggesting the combining of the smaller shipyards in the district. The report also calls on shipyards to work to clarify their capacity by using measurable criteria, as well as for a master plan for the village of Tuzla to be made and for an urgent solution to be found to the transportation and parking problems in the area.

Some further suggestions made in the parliamentary commission report on Tuzla are as follows:

In order not to cause further damage to human health and the surrounding environment, all painting work at the shipyards must take place in special paint rooms, and there should be filtration systems used in this work. All cutting, welding and paint work done on ships in the shipyards needs to be mechanized.

The main jobs being done at the shipyards need to be clarified one by one and, no matter what these jobs are, they should not be subcontracted out. The distribution of subcontracting jobs needs to be done within the framework of certain objective criteria. There need to be new laws and regulations made concerning work standards and subcontracting arenas in the sector.

The shipyard industries in Tuzla should be moved to an organized industrial region to be identified within the area between Tuzla, Yalova and ?zmit.

Shipyards that fail to implement precautions supporting employees' health and work safety will be barred from operating until these precautions are put into place.

No matter how many employees are working for a certain shipyard or subcontractor, the workplace must have at least one expert on employee health and work safety as well as one doctor on hand.

Salaries of work safety experts are to be paid by the Ministry of Labor and Social Security rather than by the owners of the shipyards. Employers will then pay not only the insurance premiums for their employees, but also the money that covers the experts' salaries, to the ministry.

Uninsured employees will not work at the shipyards.

A unit that employs labor inspectors and social security inspectors is to be set up in Tuzla. Inspectors working at the unit will focus their work only on the conditions at the Tuzla shipyards.

Appropriate changes that keep in mind the main causes for recent accidents need to be made to current regulations guiding the shipyards.

A Council on Employee Health and Work Safety Information should be formed. Employees at shipyards should be generally not work more than seven-and-a-half hours in a day.

The number of ship construction classes offered at Turkish technical schools needs to be increased.

A special firefighting unit equipped to deal with the needs of the Tuzla shipyard industry needs to be set up in the Tuzla district.

A new hospital featuring an emergency room and departments for orthopedics and trauma should be built in Tuzla.

This news is a total 1956 time has been read