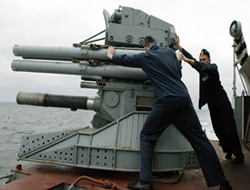 The commander of Nato's anti-piracy patrol due to start soon off Somalia says it will be difficult to defend ships from pirate attacks.

The commander of Nato's anti-piracy patrol due to start soon off Somalia says it will be difficult to defend ships from pirate attacks.

"The time that a pirate unveils himself to the time that he's onboard ship is such a short period of time," Admiral Mark Fitzgerald said.

More than 30 ships have been seized this year in the busy shipping lanes near Somalia and in the Gulf of Aden. Nato is sending seven frigates to support US navy vessels already there, while India and several European countries have said they will also mount anti-piracy patrols.

Admiral Fitzerald said Nato's mission was primarily to protect ships carrying UN aid to Somalia where more than three million people - almost half of the population - are in need of food aid.

But he hoped the Nato vessels would be able to protect other ships - around 20,000 vessels pass by Somalia each year.

"We're there to try to deter the pirates," he added.

However, given the amount of traffic, he said, ''it was difficult to spot who was a pirate.From a military standpoint, we certainly are limited by what we can do. How do you prove a guy's a pirate before he actually attacks a ship?"

He also said that the North Atlantic Council was still drawing up the rules of engagement for pirates.

"All we've been told is to prepare a plan to go down there. So [the rules] are going to have to be debated."

Earlier this month, Nato spokesman James Appathurai told that the Nato war ships would be able to use force if necessary in accordance with international law.

Piracy off the coast of Somalia is estimated to have cost up to $30m (£17m) in ransoms so far this year, according to a recent report.

Authorities in Somalia's semi-autonomous region of Puntland say they are often powerless to confront the pirates, many of whom are based in the town of Eyl.

Most vessels are freed after their owners pay the hefty sums, but about 10 are still being held, most notably the MV Faina - a Ukrainian ship loaded with 33 tanks and ammunition headed for Kenya.

Human Rights Watch says Somalia is the most ignored tragedy in the world.

Somalia has lacked a functioning central government since 1991 and has been afflicted by continual civil strife.