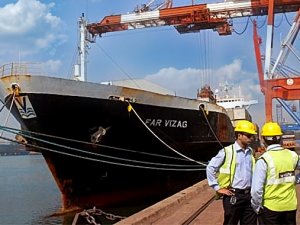 The two records have been established in loading Thermal coal in the first three days of the New Year. The cargo was loaded on non-mechanical system mode.

A quantity of 41,808 MT Thermal coal bulk cargo, account Tamil Nadu Electricity Board, was loaded in less than 24 hours on to the vessel MV Chennai Jayam for which loading started on 0630 hours on 2nd January and completed on 0600 hours on 3rd January 2015. This is the National record among major ports in India for thermal coal loading surpassing the earlier record by SICL at the same port on 25/02/2012 on to vessel MV Tamil Periyar.

Subsequently in another vessel MV Tamil Anna, the South India Corporation Ltd., also established another record by loading 24702 MT in 15 hours time. The loading was started at 14.30 hrs of 3rd January and completed 0600 hrs of 4th January 2015. The cargo belongs to Tamilnadu Electricity Board.

Mr. A. Seeralan, In-charge of Visakhapatnam SICL thanked the whole stevedore team of the company, the authorities and work force at Visakhapatnam port for extending co-operation for achieving this New Year records.