South Korea and India Plan to Collaborate on Shipbuilding 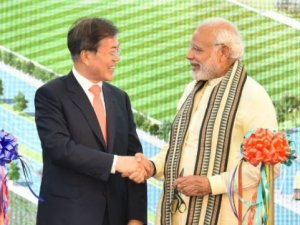 South Korean President Moon Jae-in, is visiting India for the first time seeking to expand cooperation on a range of industries including shipbuilding.

South Korean President Moon Jae-in, is visiting India for the first time seeking to expand cooperation on a range of industries including shipbuilding.

Moon said on Monday that he was committed to raising South Korea’s relations with India to the level of those with China, Japan, Russia and the U.S - a election pledge he made. The visit has been planned by his administration since taking power in May this year.

“India is witnessing dynamic development,” Moon said, adding that his country would contribute actively to the “Make in India” policy, noting some 500 South Korean companies are already doing business in India. He also asked Indian companies to invest in South Korea, saying the ongoing rapprochement between his country and North Korea may lead to new opportunities.

"India and South Korea are the world's seventh and 11th largest economies. However, trade between the two countries came to $20 billion last year, which is not small but far short of our expectations," Moon said.

Moon and Indian Prime Minister Narendra Modi jointly inaugurated a large Samsung mobile phone manufacturing facility in Noida. Modi said the “Make in India” initiative was not just an economic policy measure but also a resolve of better ties with friendly nations such as South Korea. He said that there is an open invitation for businesses across the world who want to take advantage of India's new transparent business culture.

Local media reports indicate that Moon’s visit to India and then Singapore are designed to advance his “New Southern Policy” with the two countries seen as key to expanding the nation's diplomatic and economic strategies. “My new southern policy is aligned with Prime Minister Modi's Act East Policy. Both the policies will come to completion when prosperity spreads across the whole of Asia. I suggest future-oriented cooperation with a 3P+ approach that goes beyond the New Southern Policy of Korea that focuses on people, prosperity and peace.”

This news is a total 1711 time has been read
Tags: South Korea and India Plan to Collaborate on Shipbuilding