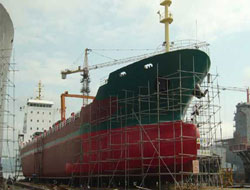 South Korea plans to change accounting rules for shipbuilders to help bolster their balance sheets, as a 32 per cent plunge in the local currency this year slashed their capital by as much as 50 per cent.

South Korea plans to change accounting rules for shipbuilders to help bolster their balance sheets, as a 32 per cent plunge in the local currency this year slashed their capital by as much as 50 per cent.

The rules concern the hedging positions of shipyards, and would allow them to calculate the value of orders on hand as they are delivered.

Jun Kwang Woo, chairman of the Financial Services Commission, yesterday told lawmakers about the plan, which extends to other exporters such as car makers 'The current accounting methods could give the wrong impression that shipbuilders are having financial problems,' the Korea Shipbuilders' Association said in a statement yesterday. 'This could cause shipowners to lose confidence in shipyards and make it harder for them to get proper funding.'

South Korea's short- term external debt, which includes those linked to exporters, has almost tripled to US$175.65 billion as at June 30 from the end of 2005. The won slumped 9.7 per cent yesterday on concern the global credit freeze will make it difficult for local banks to service their debt.

'At the current pace of the won's drop, some of the shipyards may soon see their capital completely wiped out,' said Lee Jae Kyu, an analyst at Mirae Asset Securities Co in Seoul.

Hyundai Heavy Industries Co, the world's largest shipbuilder, lost about two trillion won (S$2.45 billion), or 35 per cent of its capital, at the end of June as the weaker won increased the value of the loss on dollar-denominated orders.

Samsung Heavy Industries Co and Daewoo Shipbuilding & Marine Engineering Co, the second and third-largest shipyards, saw their capital reduced by about half at the end of June. The decline in the won was the most since the International Monetary Fund bailed the nation out in 1997. The Kospi stock index slid 9.4 per cent, the biggest decline since September 2001.

According to current accounting rules, shipyards are required to include contracts that haven't been executed in their balance sheets. Those figures are adjusted every quarter to reflect the currency's movement at the end of each quarter.

Shipyards and other exporters lock into hedging contracts to protect themselves against currency moves as soon as a contract is signed. While a weaker won would help increase sales when converting overseas earnings into the local currency, it also widens losses on hedging contracts at the same time.

'The big swing in the currency raises a lot of uncertainties for companies as banks could be faced with liquidity problems and may not have enough to lend,' said Lee Sang Jae, an economist at Hyundai Securities Co in Seoul. 'This shows how weak the world economy is becoming, which means demand for Korean-made products could slow.

This news is a total 698 time has been read