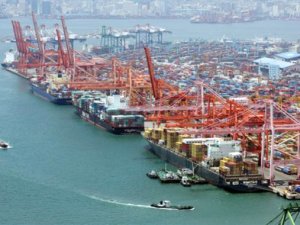 On July14th, 2015, the South Korean government said South Korea plans to transform Busan into the world’s No. 2 transshipment cargo port by 2020 by building up infrastructure and streamlining operations.

Due to the move the country’s largest sea port could be able to outstrip Hong Kong for the second place slot amidst the world’s transshipment harbors and place it below Singapore, the Ministry of Ocean and Fisheries said.

Transshipment refers to the intermediate handling of the containers and cargo and Busan’s last year record of the transshipment volume hit 9.43 million twenty-foot equivalent units (TEUs), with numbers to rise to 13 million TEUs by the target year. This can produce an economic impact of some 1.5 trillion won (US$1.3 billion), the ministry said.

To reach the goal, the ministry said, the measures will be taken to gradually move all the container operations, which make up the bulk of the transshipment cargo from Busan’s North Port, to its New Port in order to channelize the operations.

“In the first half of 2016, a Global Terminal Operator, or GTO, comprising five companies including Busan Port Authority, will be launched to better manage various operations,” the ministry said.

And at present Busan handles cargo moving to and from China, Japan, Russia, North and South America and Australia.

This news is a total 6805 time has been read
Tags: South Korea, Busan, transform Mauritius Spill: Salvors Stop Grounded Bulker's Fuel LeakWith the situation remaining precarious, the prime minister of Mauritius, however, has warned his county to prepare for the worst-case scenario. The spill is already being called the worst in Mauritius’ history.