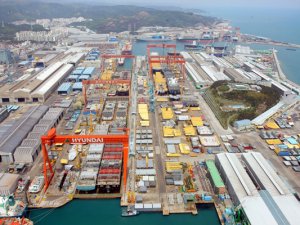 South Korea's shipyards have called on steelmakers to keep the prices of shipbuilding plates at current levels until business improves.

South Korea's shipyards have called on steelmakers to keep the prices of shipbuilding plates at current levels until business improves.

Shipyards are expected to have their worst annual performance in history, the statement said.

In the first half of the year, thick steel plate prices rose 50,000 won ($44) per ton, but in response to the Association's statement, steel companies say they have supplied plate at low cost even if it meant they suffered losses.

South Korea has the world's three biggest shipbuilders by sales: Hyundai Heavy Industries, Samsung Heavy Industries and Daewoo Shipbuilding & Marine Engineering. They have been struggling with low orders and rising costs since the 2008 financial crisis. As of the end of June, the three top South Korea shipyards had an order backlog valued at $32.19 billion, which will keep their shipyards busy for about a year, reports Yonhap News.

On Thursday last week, Hyundai Heavy Industries said it achieved 28 percent of its annual order target of $10.17 billion in the first half of the year due to sharp declines in offshore facility projects. The company noted rising steel plate prices in its June financial presentation. Companies with larger facilities, such as Hyundai Heavy Industries, have lowered unit prices for big vessels by packaging several orders together into lots. The company's yard in Ulsan is the largest in the world, with nine docks capable of producing 10 large tankers in six months.

Last Friday, about two hundred workers at Hyundai Heavy Industries staged a partial strike indicating their job security concerns. The shipyard is planing to suspend work at its offshore facilities shipyard in August. Hyundai Heavy Industries' President and CEO Kang Hwan-goo said foreign yards in countries such as China have labor costs that are roughly a third of South Korea's.

Leaders from China, South Korea and Japan have discussed the industry's over-capacity, but none are willing to make dramatic reductions to an industry that is a major employer.