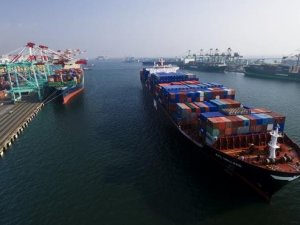 This was the fourth consecutive month to register lower southbound Asia-ECSA volumes and this weakening trend contributed to a third-quarter decrease of (also) 7.7%.

According to Drewry, strong volumes in the fourth-quarter of 2013 are helping to just about keep the rolling 12-month average in positive territory at 1.6% in September, but that figure is likely to turn negative by the end of the year. After nine months of 2014, traffic on this route was down by 1%, representing approximately 11,500 teu in lost volumes.

Trade to Brazil, which accounts for about three-quarters of Asia to ECSA traffic, is faring better than the Plate region of Argentina and Uruguay. After nine months, Asia to Brazil volumes were down by 0.6% according to Datamar, while Plate volumes over the same period experienced a sharper drop of 2.4%.

Despite the slowdown, Drewry said that Brazil remains a major draw for logistics investment and in early December a preliminary environmental license was granted for Porto Central, a green-field site located between Vitória and Rio de Janeiro.

The main backers of the USD 1.9 billion project are Brazilian developers TPK Logística and the Port of Rotterdam. Operations are scheduled to start in the fourth quarter of 2015 when the port will be able to handle ships of over 10,000 teu.

The largest containerships currently deployed on the trade are around 9,800 teu and the trend towards smaller ships being phased out of the trade is ongoing.

Following the voiding of five voyages in October, slot supply returned to something more like normal in November when only one voyage on the joint CSW service of MOL and Hamburg Sud was omitted, the consultancy firm added.

This meant that southbound capacity increased by an estimated 5.5% against October.

Weaker demand in September contributed to a big fall in spot market freight rates, with Drewry’s Container Freight Rate Insight reporting that Shanghai to Santos pricing fell to USD 2,560 per 40ft container, down from USD 3,540/40ft in August.

The capacity reductions of October repaired some of the damage as rates on the route rose by USD 300 to USD 2,860/40ft. Drewry has only seen one Asia-ECSA GRI announced for this month with MOL asking for USD 750 per teu, effective 15 December.

“Against our expectation, carriers have so far been reluctant to sustain capacity reduction measures, but with demand continuing to disappoint that will need to change if rates are to recover,” Drewry concluded.