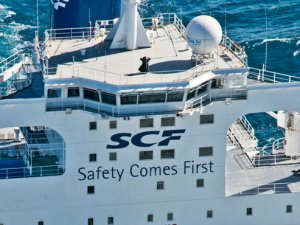 “Sovcomflot is satisfied with a strong set of third quarter results, which in turn have contributed to a very positive operating and financial performance for the nine months of 2015 results. This has been possible through a combination of positive underlying tanker market conditions, and the Group’s proven business model that continues to serve us well,” Sergey Frank, President and CEO of OAO Sovcomflot, said.

The company’s time charter equivalent revenues for the nine month period of 2015 increased by 18.9 percent to USD 946.6 million against last year’s USD 795.6 million.

“In line with our strategy, the Group has maintained a steady capital expenditure programme through the shipping cycle. The addition earlier this year of two high-spec LNG carriers, employed under long-term contracts, has contributed to a growth in operating profit of some 75 per cent from the gas transportation segment compared to same period last year. The fact that about 35 per cent of the Group’s operating profit is derived from long-term fixed-rate charters, in the gas transportation and upstream services segments, provides a welcome level of future earnings stability. On the conventional tankers side, Sovcomflot has benefited from good exposure to the market during the industry upcycle,” Nikolai Kolesnikov, Executive Vice-President, Chief Financial Officer, said.

The SCF Group currently owns 143 vessels, including vessels in joint ownership with third parties, amounting to 12.41 million dwt in total.

This news is a total 2390 time has been read
Tags: LNG, profit, Russia, Sovcomflot, Tanker