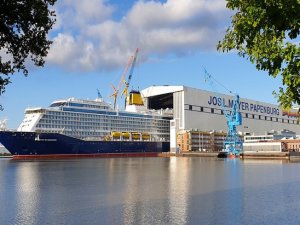 The sea trials commenced the day after the ship completed a maneuver known as the conveyance moving the ship from Meyer’s building hall in Papenburg, Germany to Emden along the River Ems.

The new cruise ship Spirit of Adventure being built by Meyer Werft for Saga Cruises commenced sea trails on September 1 as the last stage in her construction before delivery. At the same time, Saga Cruises’ parent company, the Saga group, announced plans for an equity capital raise as it works to strengthen its balance sheet.

The sea trials commenced the day after the ship completed a maneuver known as the conveyance moving the ship from Meyer’s building hall in Papenburg, Germany to Emden along the River Ems. While the ship at 774-feet in length and 58,000 gross tons is significantly smaller than the largest ships Meyer has moved along the river, it is still a challenging operation.

The conveyance for the Spirit of Adventure began mid-day on Sunday, August 30. Prior to that, the transfer team trained for the maneuver working on a computer-controlled simulator in Wageningen in the Netherlands. The transit along the river is done in reverse, with the ship sailing stern first as this creates better maneuverability with the azipod propellers. Among the challenges are passing through the sea lock and other narrow passages and the turns in the river. The transit requires approximately 12 hours.

The Spirit of Adventure is currently in the North Sea completing her sea trails. During this time, they will test all of the technical systems as well as the ship's maneuverability. At the completion of the trials, she will return to the dock for final preparation for her delivery. Saga currently expects to take delivery of the ship around the end of September. The Spirit of Adventure is the second new cruise ship built by Meyer Werft for Saga as part of a plan to modernize the company’s cruise operations. Her sister ship, the Spirit of Discovery, which was completed in 2019, is currently laid up in Tilbury, England.

Saga Cruises is part of the larger Saga group which is a travel and insurance company based in the UK specializing in products and services for people over the age of 50. Even the company’s cruises are age-restricted.

Saga announced that it plans to commence an equity raise valued at 150 million on September 10. This comes after the company reportedly rejected an approach by American private investment firms. Two-thirds of the proceeds from the planned equity raise will be coming from Sir Roger De Haan, who owned and ran Saga till selling it to a private equity firm in 2004. It is also agreed that Sir Roger, who serving as Chief Executive and Chairman for 20 years and is the son of the founder of Saga, will return to the company. Sir Roger will become the company’s non-executive chairman to help oversee the efforts to revise the strategy of Saga to proceed in a post-COVID-19 environment.

This news is a total 2299 time has been read
Tags: Spirit of Adventure on Sea Trials as Saga Cruises Prepares for Future