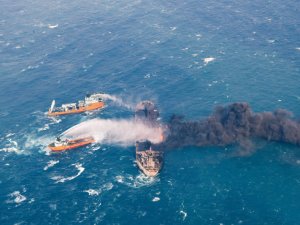 A committee investigating a collision between an Iranian tanker and a Chinese freighter has come to diverging conclusions over the causes of the worst oil ship disaster in decades, Iran’s state television reported on Saturday.

The Panama-registered Sanchi, run by Iran’s top oil shipping operator NITC, collided with the CF Crystal, registered in Hong Kong, off the coast of China near Shanghai and the mouth of the Yangtze River Delta on Jan. 6.

The Sanchi sank on Jan. 14 after burning for several days. The entire crew of 30 Iranians and two Bangladeshis, are presumed dead.

“(Representatives of) China and Hong Kong believe that both vessels were to blame, but Iran, Panama and Bangladesh see the veering to the right by the Crystal as the cause of the disaster,” Iran’s state TV quoted Nader Pasandeh, the country’s representative on the investigating committee, as saying.

Pasandeh later told the television that a court will likely have to rule in the case.

“The issue of the main cause of the disaster is a legal one and it will have to be decided by a court,” he said, without elaborating.

The Sanchi was carrying the equivalent of nearly 1 million barrels of ultra-light crude, plus its own fuel, to South Korea. According to the International Tanker Owners Pollution Federation, the collision led to the worst tanker spill in 35 years.

This news is a total 1120 time has been read
Tags: Split Verdict Over ‘Sanchi’ Tanker Collision with Chinese Freighter