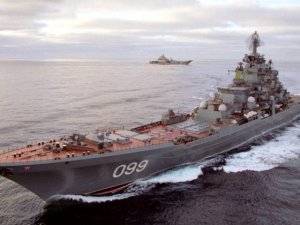 Technically the Russian Navy designation is Kirov class “heavy missile cruiser”, but Western defense commentators re-invented the term “battlecruiser” to describe these because they are the largest warships in the world besides aircraft carriers. With a length of 252 m (827 ft) and a beam of 28.5 m (94 ft), they are similar in size to a World War II Iowa Class battleship but displace almost half as much water. The Pyotr Velikiy is the flagship of the Northern Fleet.

While the Untied States Navy continues to invest in uber-expensive aircraft carriers and has turned it’s largest battleships into museums, Russia is investing heavily in large surface combatants. According to the military news website Foxtrot Alpha, Russian ship builders have been hard at work bringing a second Kirov class battlecruiser, the Admiral Nakhimov, back to life after it had been rusting away in storage for a decade and a half. She’s getting overhauled and is set to be returned to the fleet in 2019.

At that time, the Admiral Nakhimov will take the place of the Pyotr Veliky, which is slated to enter dry dock for three years where it too will get a deep overhaul and refitting just like its sister ship.

This news is a total 14066 time has been read
Tags: SPOTD: The World’s Largest & Heaviest Active Duty Warship, turkıshmaritime