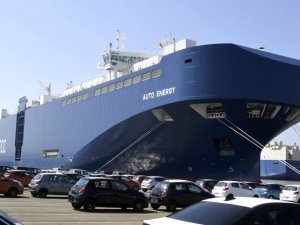 In today’s spotted, we bring you an image of Auto Energy, a new pure car truck carrier (PCTC) owned by Norwegian shipping company United European Car Carriers (UECC) which was recently presented at an event at Bremerhaven’s Überseehafen.

Auto Energy is said to be the world’s largest pure car truck carrier (PCTC) with the main engine that can run on liquefied natural gas (LNG).

“In LNG operation, the emission of nitrogen oxides is reduced by up to 80 percent and there are no sulphur dioxide or particulate emissions at all,” Jörg Schulz, Bremen’s State Councillor for Ports, commented during his visit on board the vessel.

Auto Energy is a dual-fuel vessel, which means it can run not only on LNG but also on heavy fuel oil and marine gas oil. The vessel satisfies the standards that apply within the Sulfur Emission Control Area (SECA) zones, according to bremenports.

Launched at the Nantong Cosco KHI Ship Engineering (NACKS) shipyard in Nantong, China, in June 2016, the vessel has 1A ice class certification.

This news is a total 795 time has been read
Tags: Spotted: World’s Largest LNG Car Carrier Presented at Bremerhaven