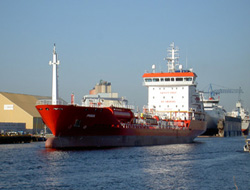 The Stockholm-based company said it had no choice but to lose the ?3m ($3.9m) downpayment already made to the Turkish yard after values of the three 8,400 dwt vessels dropped by up to ?6m each.

Managing director Rolf Hollmén said the loss was due to the company"s fleet renewal policy. Following the recent cancellation the company"s losses for the year have increased to SKr32m, although the company said this should be seen in relation to the SKr200m the company would have paid above the going market value for the vessels.

The company has no other vessels on order, but owns three chemical product tankers, and 25% of five dry cargo vessels that are part of a joint holding in Norway. It sold its last older tanker to a Russian owner last summer for an undisclosed sum.

?We have to be very cautious and cancelling the contracts was the only thing we could do,? said Mr Hollmén. ?Since we ordered them in 2007 the prices have fallen dramatically and the possibility for getting finance has changed as well.?

The first of the vessels, which were designed for operation in the Baltic and north European waters, was due for delivery later this month, with a second vessel scheduled for delivery in May.

?If we could get the vessels in the future we would,? Mr Hollmén said.

However, the yard was not in a position to drop its price.

The decision to walk away from the contract was good news for SRAB"s banks.

?It has taken away a lot of uncertainty as we could not find financing. We knew this would cost us a lot of money, but it is a clear cut and the company will survive.?

Mr Hollmén said that SRAB"s three tankers are all on contracts, two with Danish operator Herning Shipping, while the newest is on a time charter with Preem. All five drybulk vessels are on long-term time charters.

This news is a total 7383 time has been read