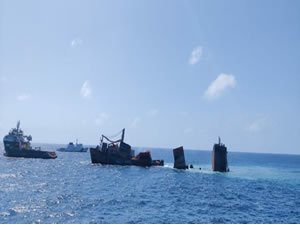 The ship’s cargo poses a major threat of environmental pollution to the area, as the vessel was carrying 1,486 containers with 25 tons of Nitric Acid, several other chemicals, and cosmetics.

Sri Lankan authorities have filed a claim with the operator of the ill-fated feeder X-Press Pearl seeking $40 million to compensate for the environmental damages caused by the ship’s sinking.

An interim claim has been lodged with Singapore-based X-Press Feeders, according to Sri Lanka’s Ports and Shipping Minister Rohitha Abeygunawardena, cited by AFP.

The ministry also plans to seek compensation for costs incurred from firefighting efforts.

The chemical-laden feeder containership X-Press Pearl sank on June 2 and touched the sea bottom off Colombo Port in Sri Lanka after burning for almost two weeks.

The ship’s cargo poses a major threat of environmental pollution to the area, as the vessel was carrying 1,486 containers with 25 tons of Nitric Acid, several other chemicals, and cosmetics.

As reported previously, a considerable number of pallets with chemicals are believed to have ended up in the sea causing massive damage to the marine environment in the area.

Local media reports indicate that bodies of turtles, sea mammals, seabirds, and fish have been washing up on the country’s beaches.

An investigation into whether these deaths have been caused by the sinking is said to be underway. Based on the update from the ship’s operator from June 12, the wreck remains on the seabed at a depth of about 21 meters, with the forward section afloat and reported to be stable.

“Observations from the salvors who remain on scene with the Sri Lankan Navy and Indian Coast Guard are that there has been no noticeable fuel oil spill,” the company said. However, X-Press Feeders added that a grey sheen continues to be observed emanating from the vessel.

“Discolouration of the sea has been apparent since the vessel’s stern became submerged, and the remnants of the cargo in the 1486 containers that were onboard were exposed to water,” the company statement further reads.

​As informed, representatives of Oil Spill Response Limited (OSRL) and International Tanker Owners Pollution Federation (ITOPF) are monitoring updates from the scene and remain on standby to be deployed in case of any reported spill.

​”The salvors will remain on scene to deal with any possible debris supported by the Sri Lankan Navy and the Indian Coast Guard, who have oil spill response capabilities on standby,” the vessel operator added. Meanwhile, Kitack Lim, Secretary-General of the IMO, voiced concern over the impact of the incident.

“We are closely monitoring the situation as it evolves, including reports of chemical pollution, debris coming ashore in the form of plastic pellets, and the potential for oil pollution,” Lim noted. IMO is liaising with UNEP and OCHA and with the South Asia Co-operative Environment Programme (SACEP), the regional organization for South Asia, with regards to possible assistance.

Lim added that the IMO was also in communication with the Sri Lankan Ministry of Environment (MEPA) for any specific technical assistance that IMO may provide.

Clean-up efforts of the debris that washed up ashore from the wreck remain underway, as explained by the Chairperson of Marine Environment Protection Authority Dharshani Lahandapura.

Nearly 1,000 metric tons of hazardous waste have been collected so far and are being stored at a storage facility, which will then proceed with the waste disposal in line with environmental regulations.