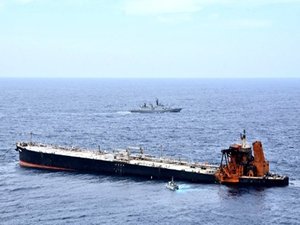 They are totaling the costs and efforts by the Navy, Coast Guard, Air Force, Ports Authority, the Marine Environment Protection Authority, and others.

Sri Lanka confirmed that it will seek compensation for the firefighting efforts and is also planning to bring charges against the captain of the burnt-out VLCC the New Diamond. Speaking to the media the Attorney General's office said that it would seek to hold the owners of the vessel accountable for all environmental damage as well as the costs incurred in the firefight and ongoing recovery.

Sri Lanka put the preliminary estimate for the compensation at nearly $2 million.

They are totaling the costs and efforts by the Navy, Coast Guard, Air Force, Ports Authority, the Marine Environment Protection Authority, and others.

They reportedly presented a bill to the Liberian-registered Porto Emporios Shipping as the owner of the vessel and New Shipping Limited of Greece which was acting as the manager.

At the time of the fire the vessel was under charter to the Indian state oil company.

The total expense is reported to be through September 15, but is not yet finalized as some of the country’s assets remain deployed near the tanker and the vessel is still in the vicinity of Sri Lanka. In addition, the Attorney General’s office said that it believes there is sufficient grounds to bring charges against the captain of the New Diamond.

They are reportedly pursuing charges against under the country’s marine pollution act as well as for criminal negligence.

India has not said if it will also seek compensation for its part in the firefighting effort which lasted for a week aboard the New Diamond.

The joint effort by the Indian and Sri Lankan forces thought they had been able to contain the fire to the engine room only to have it later spread to the deckhouse and bridge.

Then they thought they had doused the fire but warned due to the heat aboard the ship and high winds it was possible that it would re-ignite.

That caused another firefighting effort before it was finally declared out. Since then, they have been working with the salvage teams to stabilize the vessel and develop plans for the next stage of the operation.

The New Diamond remains loaded with its cargo of an estimated two million barrels of crude oil.

The Indian Coast Guard seeking to allay fears said that the salvage team reported the ship was stable and in no immediate danger.

Divers have gone down to seal ports in the ship’s hull in an effort to stop the leak of diesel fuel from the ship but so far they have not been successful in dewatering the ship. The Indian Coast Guard reported that the stern sunk slightly deeper from its earlier position. However, no additional oil leaks have been found.

Also, while there is a breach on the port side of the superstructure and a crack in the hull above the waterline, the Indian Coast Guard says this ship is not taking on water.

Sri Lanka has reportedly been against any efforts to tow the tanker into its ports and fearing an oil spill is also opposed to efforts to pump the crude oil to another tanker.

This news is a total 2872 time has been read
Tags: srilanka , New Diamond , Indian Coast Guard