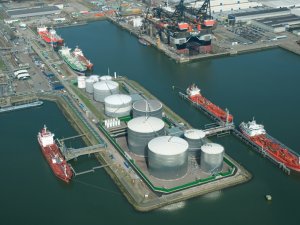 Sales of marine fuel at Colombo and Trincomalee had soared to 72,000 mt in August and 85,000 mt in September compared to usual levels of 53,000-55,000 mt/month before India implemented an 18% GST on bunker fuel on July 1, Sri Lankan bunker suppliers said.
Trade sources estimate October sales to be around 62,000-65,000 mt, but going forward, do not think this level can be sustained.
“Some volume has gone back to Indian ports, and Sri Lanka’s bunker sales will go back to pre-Indian GST levels,” said a source who supplies marine fuel at Sri Lankan and Indian ports.
India cut its GST on bunker fuel to 5% from 18% on October 6.
S&P Global Platts assessed Colombo 380 CST delivered bunker fuel at $413/mt Thursday, down $4/mt from Wednesday, and Mumbai 380 CST delivered bunker fuel at $405/mt Thursday, unchanged on the day.
Mumbai 380 CST prices have, on average, been $8.60/mt cheaper than Colombo’s for the past seven trading days, Platts data showed.
After the 18% GST was imposed on July 1, Mumbai prices moved from a $15/mt discount to Colombo in June to $20.30/mt in July, and $23.64/mt in August.
The Mumbai-Colombo 380 CST bunker fuel spread hit a high of $29/mt in September, before plunging to $4.35/mt in October. The spread is now just 70 cents/mt for November, the data showed.
But one Colombo-based supplier was optimistic Sri Lanka could maintain sales of 62,000 mt/month.
“India’s GST of 5% [on bunker fuel] is still high. Kochi, Mumbai bunker prices are not very competitive,” the supplier said.
Under the previous value-added tax regime that preceded the GST, bunker sales to foreign-bound vessels in India were deemed as exports. Only a few states taxed bunker sales to export vessels, even so, at levels well below 5%.
For these reasons, bunkering at Indian ports will still be costlier compared to the previous tax-regime, the Colombo-based supplier said.
But the jury is still out.
While Sri Lanka’s marine fuel sales have increased from 30,000-35,000 mt/month in the past two years to around 55,000 mt/month this year, partly due to healthy bunker demand at Trincomalee on the country’s east coast, most trade sources said they do not expect Sri Lanka’s marine fuel sales to hit the giddy heights of the past four months.

This news is a total 799 time has been read
Tags: Sri Lanka’s bunker fuel sales to drop 30-35%, after effect of India’s GST cut