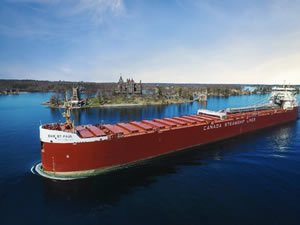 The Canada Steamship Lines bulk carrier MV Baie St. Paul became the first ship of the year to pass through the St. Lambert Lock on Monday, officially kicking off shipping on the key binational waterway connecting the Great Lakes with the Atlantic Ocean.