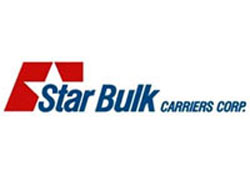 Star Bulk Carriers Corp. (the "Company" or "Star Bulk") a global shipping company focusing on transportation of dry bulk cargoes, today announced that: New Contract of Affreightment The Company has entered into its second Contract of Affreightment (COA) with Brazil's Companhia Vale do Rio Doce (Vale). The COA is for a term of two years, beginning in January 2010 until December 2011 and provides for the transportation of approximately 1,300,000 tonnes of iron ore between Brazil and China in quarterly Capesize vessel shipments with the first such shipment scheduled to commence during the first quarter of 2010. The contract rate is $24.75 per ton of iron ore transported, which we estimate will result in gross annual revenue of approximately $16 million.

The Company has agreed to sell the Star Alpha, a 175,075 dwt, 1992 built Capesize vessel to a third party for a contracted sale price of $19.85 million. We expect to deliver the vessel to the buyers in December 2009.

Re-deployment of the Star Ypsilon

The Company has chartered the Capesize vessel Star Ypsilon to Noble, for minimum of 5 to maximum of 7 months under a time charter at a gross daily rate of $43,250. The vessel was previously chartered to TMT Bulk Co. Ltd (TMT), a company affiliated with TMT Co.Ltd. under a charterparty that ran until July 2011. The vessel was withdrawn from the service of TMT for repudiatory breach of the contract by TMT. Arbitration proceedings have commenced against TMT in London to pursue damages arising from such breach, which will include the loss of hire.

Akis Tsirigakis, CEO of Star Bulk, commented: "We are pleased to expand on our beneficial relationship with Vale with the signing of our second COA. The sale of the Star Alpha, one of our oldest vessels, marks another milestone in our fleet renewal effort. We view the severance of our last ties with TMT positively, and we are pleased that we were able to fix the Star Ypsilon at an attractive rate. Having re-chartered the Star Ypsilon, the contract coverage of our fleet is now 100% for 2009, 85% for 2010 and 51% for 2011, which we believe provides significant revenue visibility."

Star Bulk is a global shipping company providing worldwide seaborne transportation solutions in the dry bulk sector. Star Bulk's vessels transport major bulks, which include iron ore, coal and grain and minor bulks such as bauxite, fertilizers and steel products. Star Bulk was incorporated in the Marshall Islands on December 13, 2006 and is headquartered in Athens, Greece. Its common stock and warrants trade on the Nasdaq Global Market under the symbols "SBLK" and "SBLKW" respectively. Currently, Star Bulk has an operating fleet of twelve dry bulk carriers. The total fleet consists of four Capesize, and eight Supramax dry bulk vessels with an average age of approximately 10.1 years and a combined cargo carrying capacity of 1,106,253 deadweight tons.

This news is a total 3404 time has been read