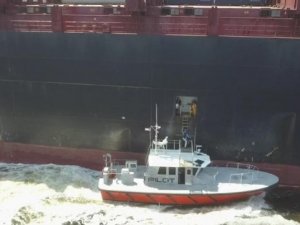 The St. Johns Bar Pilot Association, which serves the port of Jaxport, Florida, has released a video of Florida State Rep.

Cord Byrd stepping from a pilot boat to a ladder to board the boxship Dalian Express - not something that every elected official might be willing to try.

"Rep. Byrd wanted to come down and see some of the big things happening in his district," said the association in a social media post. Byrd lives in Jacksonville Beach and represents Florida's 11th District.

Bar pilots train extensively for boarding under way in order to manage the potential hazards. Ladder boardings are among the industry's higher-risk operations: Improper ladder rigging, poorly made or maintained ladders, suboptimal boarding locations or insufficient provisions for lifesaving equipment sometimes lead to fatal accidents, according to the Standard Club and the CHIRP accident reporting program. The Club reports that there is a "rising toll" of pilot ladder accidents worldwide, affecting not just pilots but also port officials, superintendents, surveyors, incoming crew, bunker personnel and stevedores, according to the Club. These accidents occur both at anchor and under way.

This news is a total 410 time has been read
Tags: State Rep. Boards Boxship from Jaxport Pilot Boat