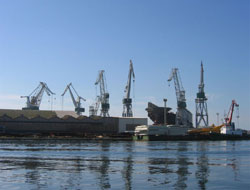 Croatia plans to call international tenders for the sale of its ailing shipyards on Jan. 20 2009.

Croatia plans to call international tenders for the sale of its ailing shipyards on Jan. 20

Croatia plans to call international tenders for the sale of its ailing shipyards on Jan. 20, in a key part of its European Union membership preparations, a source involved in talks with the EU said on Tuesday. Croatia has five shipyards. All but one have piled up huge debt and are kept afloat by high government subsidies, which are against the European Union"s market principles. "Our goal is to publish the tenders on Jan. 20. Until then we should complete consultations with the European Commission on that process," the source said.

Restructuring of the heavily subsidised loss-making shipyards is one of the major conditions for Zagreb to reach that goal.

French President Nicolas Sarkozy, commenting on the next round of enlargement of the EU, told the European Parliament on Tuesday that Croatia would join "probably in 2010 or 2011, if things go normally".

Croatia wants to keep the docks open as they are major exporters which directly employ some 15,000 people and a considerable number of related businesses, making it a sensitive social issue in the former Yugoslav republic.

Analysts say the docks badly need restructuring, with several describing them as a "black hole".

"Restructuring is a necessity. The result will be less pressure on (the) state budget and lower production capacity, but I believe, after that, shipbuilding should become sustainable," said Zdeslav Santic, a Raiffeisenbank analyst in Zagreb.

Deputy Prime Minister Damir Polancec, who is in charge of the privatisation, met representatives of the European Commission last Friday in Brussels and tentatively agreed the main principles governing the sale of the shipyards, the source involved with the talks said.

The four loss-making shipyards -- 3. Maj, in Rijeka; Kraljevica, located in Kraljevica; Brodotrogir, in Trogir; and Brodosplit, situated in Split-will be sold for a token 1 kuna ($0.189) each, the source said.

Ownership of the sole profitable shipyard, Uljanik, in the northern Adriatic town of Pula, will be split, with twenty-five percent sold to its employees, 25 percent through a public tender, and the rest listed on a bourse, he added.

The source said the docks will have to cut output from the average level of the last three years, but will then be allowed to raise it back to around this year"s level after the restructuring-a concession Brussels did not grant to existing EU members Germany and Poland, which both struggled with loss-making shipyards.

Germany ends up cutting its shipyard production by %40

Germany ended up cutting its shipyard production by 40 percent, while last month the European Commission told Poland to repay more than 3 billion euros of illegal state aid, putting its two biggest shipyards on the verge of bankruptcy.

"The Commission has showed good will in this, no country has previously been allowed to raise production capacities back after the restructuring process," the source said.

An EU spokesperson confirmed a meeting had taken place on Dec. 12 at a "technical level" and that the main conditions of the restructuring and privatisation process were discussed.

"Good progress was made and it seems that we are approaching a solution," the spokesperson added, although the Commission said it could give no further details at this point.

The new owners will be allowed to transfer almost all of the shipyards" debt-estimated at around 7 billion kuna, with most covered by state guarantees-to the Croatian state, but will have to inject fresh capital into the dated docks.

However, Zagreb will not be allowed to explicitly require investors to keep docks open. This angered trade unions, who threatened a general strike if the shipyards were closed or if a large number of employees were laid off.

"The workers from all shipyards will come to Zagreb to stage protests unless the government imposes a condition on the new owners to keep the shipbuilding business," Ozren Matijasevic, a leading union representative, said this week.

The government will hold another round of talks with union representatives next Monday, while the European Commission is scheduled to approve the conditions for the tenders by Jan. 9.