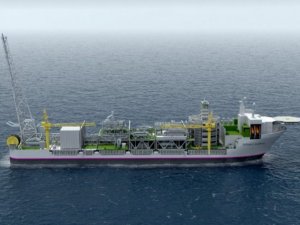 The contract has a total value of about NOK 3.8 billion (US $381 million), and includes the construction, hook-up, and integration of the topside modules with the hull of the ship-shaped FPSO.

Oslo, Norway-based Kvaerner has been awarded a large contract from Statoil for the construction and installation of the topside structure for the floating production, storage and offloading vessel (FPSO) to be located on the Johan Castberg field in the Barents Sea.

The contract has a total value of about NOK 3.8 billion (US $381 million), and includes the construction, hook-up, and integration of the topside modules with the hull of the ship-shaped FPSO.

“This is one of the large pieces of the Johan Castberg puzzle, and is a key component of the FPSO, says Torger Rød, Statoil’s senior vice president for project management control. “The contract includes building a total of ten modules, a flare boom and central pipe rack. The international competition for the contract has been tough, and we look forward to working closely with Kvaerner in the years to come. Norwegian suppliers have again demonstrated their competitiveness.”

Kvaerner will use a number of yards along the Norwegian coast for the construction work, including yards in Sandnessjøen, Verdal, Stord and Egersund.

The hull of the FPSO, including the living quarters, will be fabricated for Statoil by Sembcorp in Singapore. Delivery of the hull to Kvaerner’s facility at Stord will take place in the Fall of 2020, at which point installation of the topside structures will take place.

The FPSO is expected to be fully completed, including commissioning and testing, in the first quarter of 2022, with first oil from the field scheduled for the first half of 2022.

“The Johan Castberg development will generate substantial spinoffs for Norwegian supply industry in the years ahead. The field is also essential to the further development of industry in Northern Norway, and we are pleased that this contract will help increase activities in the north,” says Pål Eitrheim, Statoil’s chief procurement officer.

Johan Castberg will be the sixth project on stream in Northern Norway. The field will be producing for more than 30 years, with recoverable resources estimated at around 450 – 650 million barrels of oil equivalent.

Partners in the Johan Castberg project include of Statoil (operator 50%) Eni (30%) and Petoro (20%). The field development concept includes a FPSO vessel and extensive subsea development, with a total of 30 wells, 10 subsea templates and two satellite structures. Total project costs are estimated at around NOK 49 billion.

Kvaerner says as part of the contract, it plans to invest around NOK 370 million in yard upgrades of its facilities at Stord. The contract is expected to create work for around 4,800 people.

“We are pleased that we in a strong competition have been selected as contractor for one of the most important projects in the global oil and gas market. Additionally, it is a strategic advantage for Kvaerner that we further develop our expertise for floating production vessels, as several upcoming field development projects are likely to utilise similar concepts”, says Kvaerner’s President & CEO Jan Arve Haugan.

This news is a total 735 time has been read
Tags: Statoil Awards Contract for Johan Castberg Topsides to Kvaerner