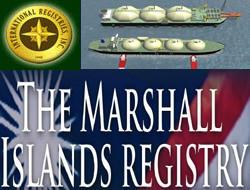 The Marshall Islands Registry surpassed the 50 million gross ton mark continuing a pattern of steady growth. In less than six years, the Marshall Islands fleet has grown from 18.5 million gross tons and 626 vessels at the end of 2003 to 50 million gross tons and 2044 vessels in July 2009 reflecting an average annual growth rate of 23% in terms of gross tonnage. The Registry, which is administered by International Registries, Inc. (IRI), attributes its success to the decentralization of registry services to its 20 worldwide offices. The milestone was passed last week when the 11,259 gross ton newbuild tanker SONGA EMERALD, managed by Songa Ship Management of the UK, was launched at Samho Shipbuilding in Korea. ?This registration, like many in the past, has really shown the true worth of our efforts towards decentralization,? observed John Ramage, Director of Worldwide Business Operations, who noted that the Registry"s London office interfaced on the paperwork side of the registration transaction, while the Registry"s Singapore office handled the closing and mortgage recordation. The Registry"s Special Agent in Korea attended the delivery meeting and provided the vessel"s certificate of registry. ?Since close to 50% of the tonnage entering the Registry is newbuilding tonnage, our offices in the Far East are often involved in the closing and attending the delivery meetings in Asia. The interface between our worldwide regional offices is critical to ensure a smooth registration process,? commented Annie Ng, Managing Director, International Registries (Far East) Limited.

The 44,067 gross ton tanker MORAY, operated by Prime Marine Management in Greece was also registered in early July. ?The Greek shipping community continues to be a major contributor to the growth of the Marshall Islands Registry. The full services offered by each local Registry office enables us to conduct timely registrations and provide first class post registration services to our clients without the direct involvement of IRI"s headquarters in the United States,? remarked Theo Xenakoudis, Managing Director of IRI"s Piraeus office.

?The Marshall Islands continues to steadily move up the list of the world"s top ten open registries in terms of quality and tonnage,? IRI President Bill Gallagher said, crediting the growth not only to the Registry"s decentralization but also to its dedication to safety, post registration services and overall response time to the customer. ?The Registry"s methodologies have been constantly amended and evolved to meet the ever demanding issues confronting a flag state in the modern world. Therefore, our clients are able to truly receive the support they need to keep their ships moving,? he concluded.

This news is a total 2521 time has been read