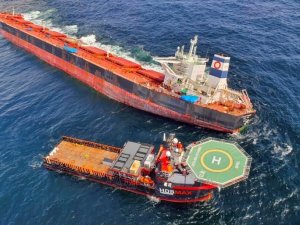 Salvage crews are continuing with the debunkering operation on the grounded MV Stellar Banner off Brazil.

Fuel oil from the vessel is being pumped to the offshore supply vessel HOS Brass Ring, owned by Hornbeck Offshore Services, the Brazilian Navy said.

The Navy repored Thursday that so far 1,170 cubic meters of fuel oil had been pumped from Stellar Banner to HOS Brass Ring and the operation is continuing.

SBM Offshore’s Normand Installer is now also on scene assisting with the operation.

The Navy reports that the situation remains stable and no oil has been observed in the surrounding waters.

The debunkering operation is being conducted by a joint team from Ardent and SMIT.

In addition to the support vessels mentioned, there are an additional nine tugs, four emergency spill response vessels, four platform supply vessels and two offshore support vessels, in addition to at least one helicopter, four vessels from the Maranhão, a Poseidon aircraft, and two government vessels.

The MV Stellar Banner ran aground approximately 100km from coast of São Luís on February 24, 2020, as it departed Vale’s Ponta da Madeira Maritime Terminal with iron ore bound for China. All 20 crew members were subsequently evacuated in good condition.

The Stellar Banner is a 300,663 dwt Very Large Ore Carrier (VLOC) built in 2016 and registered in the Marshall Islands. It is owned and operated by Polaris Shipping of South Korea and chartered to Brazilian mining giant Vale to transport iron ore from Brazil to China.

Experts said previously that approximately 3,500 tons of fuel oil and 140 tons of gas oil remain on board the grounded the VLOC.

This news is a total 1407 time has been read
Tags: Uncategorized