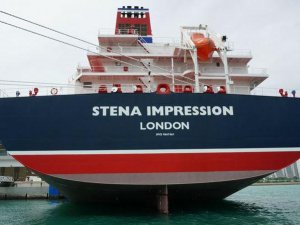 The Stena Impression is owned by a joint venture of which Stena Bulk and Indonesian Golden Agri Resources (GAR) each own 50 percent.

The fleet of ten newbuilds, worth a total of USD 400 million, are expected to be delivered by 2017.

The vessels will be operated by Stena Weco and will trade within the company’s logistical systems, which now will include fleet of 60 tankers.

The IMOIIMAX tankers have been designed to transport IMO 2 and 3 cargoes such as vegetable oils and chemicals as well as clean and dirty petroleum products.

The Stena Impression will begin its maiden voyage with a cargo of palm oil and is expected to reach her destination in the U.S. in about two months.

The concept has been developed by Stena Teknik together with the Chinese shipyard Guangzhou.

The tanker has 18 tanks of the same size, each with a capacity of 3,000 m3, which allows for greater cargo flexibility.

According to Stena Bulk, a large number of innovative technical solutions have been implemented, which together, when sailing at service speed, result in 10-20 percent lower fuel consumption compared with other vessels of the same size.