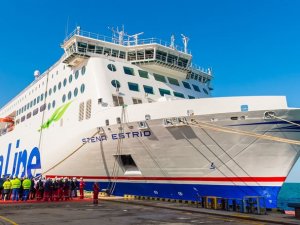 Swedish ferry company Stena Line has taken delivery of its newest ferry Stena Estrid at a handover ceremony at the AVIC Weihai Shipyard in north-western China.

The vessel will now embark on a six-week journey to its new home on the Irish Sea, where it will begin service on the Dublin to Holyhead route in January 2020.

Stena Estrid is the first of five next generation Stena Line RoPax vessels that are currently being constructed.

A further two of the new ferries are also destined for the Irish Sea with Stena Edda expected to commence operations from Belfast to Liverpool next spring, and a third vessel Stena Embla to be introduced on the same route in early 2021.

“Taking ownership of Stena Estrid is a major milestone for Stena Line,” Niclas Mårtensson, Stena Line CEO, said. He added that the development “is the result of a very significant investment in our Irish Sea operations that reflects our commitment to the region and will ultimately see three of the world’s most modern ferries operating between Ireland and Britain.”

At 215 metres in length, Stena Estrid will provide freight capacity of 3,100 lane meters, meaning a 50 per cent increase in freight tonnage, and the space to carry 120 cars and 1,000 passengers and crew.

This news is a total 320 time has been read
Tags: Stena Estrid, Stena Line