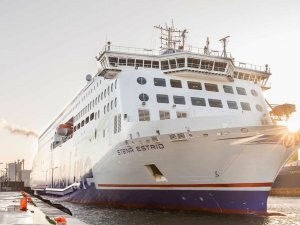 Stena Estrid has been hailed as the “most efficient ship in Stena’s history”.

Steno RoRo’s 215-m long, 3,100-lane m capacity Stena Estrid is the first in Stena Line’s new line of E-Flexers. Five of these vessels are for Stena Line and additional vessels will be on long-term charter for other ferry operators.

Nine E-Flexer vessels have been ordered and two have been delivered: Stena Estrid, delivered in November 2019 and Stena Edda, in January 2020.

Deltamarin is working on the project not only as a designer but also as a provider of comprehensive project management services to support the shipyard in the vessels’ construction. Deltamarin developed the concept of the vessel in close collaboration with Stena. Deltamarin says that in the design special attention has been paid to the vessels’ fuel efficiency as well as maximising the cargo space.

Stena RoRo project manager newbuilding Magnus Lander tells Passenger Ship Technology “The ship is designed for the Stena Line route network and to combine maximum cargo intake, quick turnarounds and high passenger comfort with low fuel consumption. The design is based on the legacy from many Stena projects in the past where optimal flexible performance has been sought for.”

Stena Estrid participated in sea trials to test the performance of the vessel including all the onboard systems such as the propulsion plants. The vessel is equipped with twin-screw Caterpillar marine propulsion drive trains with MPP 1410f propellers, shafts and packaged gearboxes.

The vessel has a maximum output of 12,600 kW and is equipped with a MaK 12 M 43 C engine. The main engines and propulsion packages for seven of the ropax series were supplied by Caterpillar Marine.

Stena Teknik project manager hydrodynamics Per Wimby says “After a long period of optimisation and testing with Weihai Shipyard, Deltamarin, MARIN and Caterpillar we now see the final product, which is the most efficient ship in Stena’s history.”

Speaking about the benefits of the propulsion system, Mr Lander says “Conventional ferries usually have four main engines for redundancy and to optimise the speed ranges with 85% MCR and shaft generator at constant speed. Stena Estrid is designed with two diesel-powered main engines, variable frequency shaft generators and with ability to feather the propeller blades on either side giving the vessel’s machinery a wider range to optimise the cost and fuel consumption. The ship is scrubber and gas-ready to meet any future route-specific requirements.”

Indeed, as Mr Lander points out, the vessel has a gas-ready design philosophy and description which includes drawings and calculations to convert the vessel to dual fuel. Space and calculations have been prepared to allow for a dual-fuel conversion at a later stage. He comments “It goes without saying that it is always good to do the homework before the exam and the vessel is ready to be converted should the price and availability for LNG be favourable for the operator.”

Singling out other environmentally friendly and energy efficient features Mr Lander says “The ship’s hull has an excellent hydrodynamic performance. Two leading naval architect consultancy firms were competing to win the design by achieving the lowest resistance through the water. Stena Estrid’s Energy Efficiency Design Index (EEDI) is significantly better than similar older tonnage and regardless of which fuel will be consumed onboard, it will be much less than conventional tonnage.”

Propellers with feathering mode which further optimises the speed ranges.

The arrangement combines a variable frequency drive and permanent magnet shaft generator, along with a dedicated power management system. In power take-out mode, the system generates power for the ship’s electrical network. The shaft generator, driven by the main engine, can produce all the electricity required on board without using fuel to run auxiliary generators when sailing. The variable frequency drive allows the main engine to run at variable speed while producing electricity on board.

The concept drew plaudits for building on well-established energy saving principles, with a novel application of permanent magnet technology. One judge at the Marine Propulsion Awards praised the WE Tech system on Stena Estrid as a “good basic concept for a hybrid propulsion train” that could easily be extended with the addition of energy storage. Another highlighted it as “a real-life example of the extended use of permanent magnets” beyond their established uses in thruster and winch motors.

Stena Line fleet manager Bob Brouwer received the award with WE Tech sales manager Peter Lindström. "Stena Line has put the latest technology in its Chinese newbuilds and we will continue to add more such innovations in the future," Mr Brouwer said.

Explaining why Stena RoRo chose a shipyard in China to build the ferry, he says “To build a ship is very cost efficient in China compared to South Korean, Japanese and European yards. AVIC was determined to enter the ropax ferry building market and to develop the E-Flexer concept together with Stena. The shipyard in Weihai has a young modern leadership with a good safety track record. The design and production are well supported by Deltamarin and Reinhold & Mahla.”

Speaking about the technical differences between Stena Estrid and the other ferries in the E-Flexer series, he says “There are a few adjustments to the other E-Flexers. For example, one will be equipped with a closed-loop scrubber, two ships will be powered by an LNG dual-fuel system, two ships will be 25 m longer than the original design and one vessel will be a day ferry with a specialised port interface for the quick turnaround in the English Channel.”

Deltamarin managing director Janne Uotila says “One of the key principles of Deltamarin designs has always been energy efficiency. Due to environmental reasons and stricter regulations, this is now even more important and this project is a good example of this,” adding “This is a great achievement and a benchmark for how close collaboration between all parties can lead to fantastic results.”

Weihai Shipyard developed its facilities for constructing the Stena ferries. A new plate welding production line has been in operation to meet the high requirements of thin plate welding. Furthermore, a workshop for modular cabin production started production in 2018. The unit cabin building method means the cabins can be prefabricated. This is believed to be the first Chinese shipyard to have such a facility.

In addition to its relationship with Deltamarin, the shipyard has built strong links with other European resources for vessel construction, using German interior outfitter R&M for the Stena vessels. R&M has a local branch in China, which is also beneficial.

When Passenger Ship Technology interviewed Weihai general manager Eric Deng at SMM 2018, he said the shipyard would learn about interiors from R&M with the aim of managing this aspect themselves for a future ropax project.

Explaining how the shipyard approached the project, Mr Deng said the yard organised a dedicated technical research team and project management team to take care of the Stena project.

Stena Line is deploying AI-driven data management to improve efficiency, sustainability and profitability. Its first step is a pilot project to develop a unique data management solution with Semcon.

Semcon is developing a smart solution to manage the data required for new digital offerings and additional AI projects for the shipping company going forward.

“Stena Line’s ambition is to be the world’s first cognitive ferry operator using AI throughout the entire organisation,” says Dr Carlsson. “To succeed in this, we need to structure all our data and intelligence and make it available.”

“Stena Line is embarking upon a fantastic data transformation initiative,” he says. “We are able to create smart data management solutions that allow new digital services to be implemented,” says Mr Aldén.

Previous positions include manager liner and breakbulk services at Stora Enso and he also spent nine years at Northern Marine Management, starting as chief officer before becoming captain and then superintendent. He started his career as deck officer at Stena Line. He graduated with a BA in nautical sciences, master mariner, at Kalmar Maritime Academy.