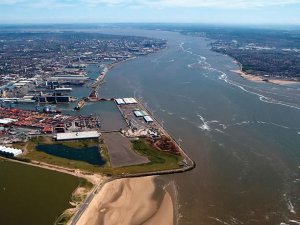 UK port owner and operator Peel Ports was forced to close the Port of Liverpool after the Storm Doris battered northern England throughout Thursday, February 23, with wind gusts reaching up to 100 miles per hour.

The Port of Liverpool was subsequently re-opened but is still experiencing disruption to services, according to Peel Ports.

Storm Doris, which has tracked across Northern Ireland and northern England this Thursday, brought damaging winds, rain and snow to the UK.

”As Storm Doris moves eastwards over the North Sea later today the winds and snow will ease,” Met Ocean said in a statement.

Port of Liverpool currently covers around 8% of the container market in the UK, with the share expected to rise to between 15% and 20% after the opening of the GBP 400 million Liverpool2 deep-water container terminal.

This news is a total 693 time has been read
Tags: Storm Doris Closes Port of Liverpool