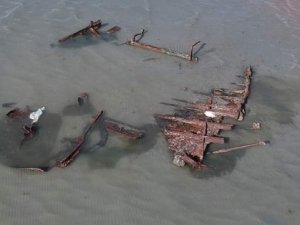 The wreck is an old steel boat that likely dates back to the turn of the 20th century. It is likely too degraded for a positive identification, but the park has an educated guess about its provenance.

"The boat has been twisted up in a U shape,” park manager Dave Shearer told local media. “We think it’s from the railroad fleet when Union Pacific had the causeway out here."

While it may not be as large as the Great Lakes or the Caspian Sea, the Great Salt Lake develops powerful storms, and small craft caught unawares can be vulnerable. According to Shearer, the lake has an abundance of wrecks from the past century and a half of use. As the lake's water level is in a pattern of long-term decline, more of them are being exposed and rediscovered.

This news is a total 140 time has been read