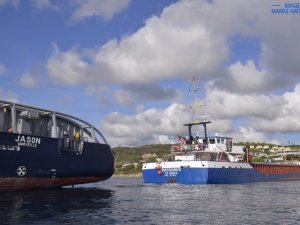 The Rhodanus general cargo ship that ran aground in the Strait of Bonifacio on October 13 has been successfully refloated under the watchful eye of the French maritime authority Premar.

Before the salvage operation could be undertaken, 2,650 tons of steel coils had to be offloaded and all fuel from the ship pumped out.

Urgency was a priority as the 1998-built ship grounded in a marine reserve and the authorities wanted to minimize the possibility of a pollution from the accident.

All preparatory actions were completed by October 17 and the ship was pulled from the seabed by tugs on October 18.

To remind, the 3,000 dwt ship grounded off the French island of Corsica after failing to respond to repeated radio calls. According to Premar, the ship eventually missed an important turning point and headed straight for the coast at full speed.

Rhodanus had been en route from the Italian Port of Taranto to the French Port-Saint-Louis-du-Rhône at the time of the grounding.