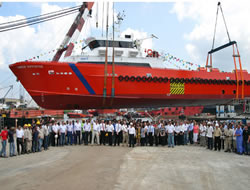 Henderson, Western Australia, based Strategic Marine has launched the 40 m fast support vessel Samson Supporter from its Singapore shipyard. It is the first of two vessels ordered last July by another Western Australian company, Samson Maritime of Fremantle, and desiged specifically for the Australian offshore market.

The Samson Supporter, has a top speed of over 25 knots, business class seating for 50 passengers with the ability to increase passenger numbers to 100 by using a modular interior, accommodations for twelve crew members, 120 sq m of deck space, as well as a central deck house.

Samson Supporter has a dynamic positioning capability to allow it to remain on station for extended periods and conduct accurate ROV work, and a 1 s qm moon pool to allow hydrographic survey equipment to be deployed in a secure housing.

Other features includes an A-frame crane installed on the aft of the cargo deck and a FiFi 1 firefighting installation, including a vessel deluge system.

"These boats have the inbuilt flexibility to allow them to perform a wide range of both inshore and offshore maritime support tasks, including high speed supply runs, crew transfer, safety support and intervention and inshore and offshore survey tasks," says Samson Maritime Director Jeremy Williams

Strategic Marine Director Ron Anderson said he was delighted that the company's Singapore yard had once again demonstrated its ability to deliver ahead of schedule.

"This early launch was a great achievement since there were a number of significant contract variations which included a variety of interesting technical modifications," he added.

In addition to the Samson Supporter and its sister vessel, the Samson Supplier, Strategic's Singapore yard is also currently working to complete two 40 m utility vessels ordered by Malaysian offshore servicing company Dinastia Jati Sdn Bhd last September. These are due for delivery in July and September this year.

With three other yards in Australia, Vietnam and Mexico, the company is currently constructing 63 fully-financed vessels with an order book value of AUD$252.3 million.

The company's Vietnamese yard, which has the capability to construct large steel vessels, was officially opened in February this year and has already won more than AUD$95 million in orders.

To date, the facility has completed construction of the 103 m x 50 m steel pontoon base for the Australian Marine Complex's AUD$62 million Floating Dry Dock, which was shipped to Western Australia late last year. The dock is expected to be completed at the AMC complex in Henderson within the next two months. 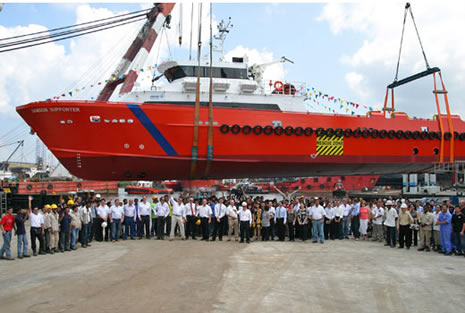 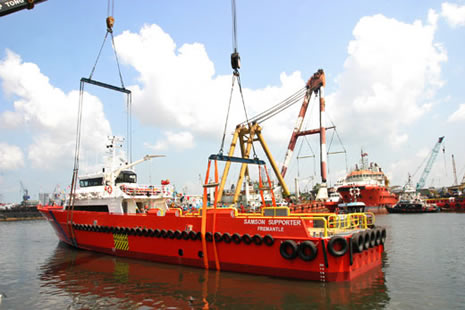