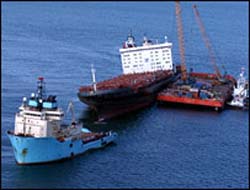 The stricken container ship MSC Napoli has been refloated, nearly six months after it was grounded off the east Devon coast.

The stricken container ship MSC Napoli has been refloated, nearly six months after it was grounded off the east Devon coast.

The 62,000-ton vessel floated free a mile off Sidmouth after 58,000 tons of water was pumped from her holds.

The ship has been towed 500m south of its original position where it will be inspected by divers for several days before its next move.

The vessel carrying 2,300 containers was damaged in a storm in January.

See how the MSC Napoli was refloated

A barge with winches and cranes, along with tugs and an anti-pollution vessel are assisting at sea in Branscombe Bay.

About 1,900 seabirds along the coast were affected after 200 tonnes of oil leaked from the vessel soon after grounding

"After looking at the ship from the same angle over the past six months it's amazing to see it floating free."

Since the decision was made in January to beach the vessel, salvors have worked around the clock to remove all of the containers from the stricken ship.

Approximately 150 of them were classed as having potentially hazardous contents.

More than 100 containers went overboard and 58 were washed ashore, leading to a scavenging and looting spree.

Of the containers that went overboard, one contained battery acid and perfumes, and one small gas bottles for car airbags.

Others housed a variety of goods including BMW motorbikes and car parts.

MSC Napoli: On Monday, 58,000 tons of water pumped out. More than 2,000 containers and about 4,000 tons fuel already removed
Big Foot Barge: Winches/cranes used to lift Napoli from seabed
Lead tug: Helped turn Napoli and tow it to new position for checks
Anti-pollution/support vessels: Dispersant carried by vessels, to tackle remaining pollutants. Supported by spotter planes looking for pollution. Steering tug, workboats and crew boat also present
Hull damage: Divers will inspect bottom of hull following refloat. Damage to be assessed and decision on moving Napoli to be taken.
www.TurkishMaritime.Com.tr
This news is a total 2119 time has been read