Strike called off at Kochi port 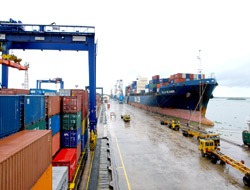 Kochi, May 18 The strike by a section of employees of the Kochi port, who were protesting the implementation of the award of the National Industrial Tribunal was called off on Sunday night after an understanding was reached between

STRIKE CALLED OFF AT KOCHI PORT

Kochi, May 18 The strike by a section of employees of the Kochi port, who were protesting the implementation of the award of the National Industrial Tribunal, was called off on Sunday night after an understanding was reached between the trade union leaders and the management.

No overtime bookings will be resorted to in case of shortage of personnel.

A statement issued by the port management said that it had been conveyed to the union leadership that there would be no retrenchment of employees and that the port administration would be willing to look at the practical difficulties in the implementation of the award.

It will also consider the demands of the employees, if additional manpower was required to be deployed for any specific activity, to resolve practical problems, if any.

It was also conveyed that the implementation of the award itself was not negotiable as it was the decision of a judicial body and that if any party was aggrieved by it, the only recourse available would be to approach a higher judicial body.

In the meantime, at a meeting of all port chairmen convened by the Secretary (Shipping) on May 11, it was reiterated that all ports would implement the award in letter and spirit.

The strike by the marine branch employees lasted 22 days.

However, the port administration had made alternative arrangements to ensure that all port services were maintained. The port was able to ensure complete and normal port operations throughout the strike period.

This was made possible because of the assistance rendered by the Southern Naval Command, and subsequently, by other alternative arrangements made by the port. The vast majority of the port employees continued to work during the period and kept up operations smoothly throughout the period, the statement added.

This news is a total 2871 time has been read