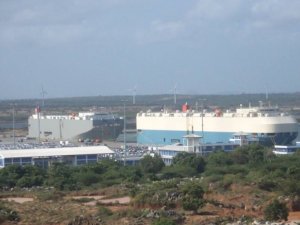 Sri Lankan naval troops fired warning shots on Saturday to break up a protest by striking dock workers who had held up a Japanese car carrier for four days at Hambantota port.

Protesters had prevented the K Line controlled vehicle carrier Hyperion Highway from leaving the port. It finally left for Oman on Saturday afternoon.

Temporary workers began striking Tuesday, demanding to be made permanent employees of the state-run Sri Lanka Ports Authority. The workers worry about their future as China Merchants is set to take over the port.

This news is a total 1313 time has been read
Tags: Striking Sri Lankan dockworkers fired upon