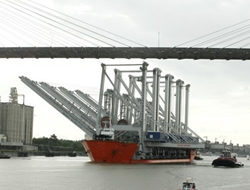 The U.S. Department of Transportation’s Maritime Administration (MARAD) on Monday released a study on shipping patterns and industry costs that will help the United States prepare for the anticipated impact on its ports, waterways and intermodal freight systems from the Panama Canal expansion.

The expansion of the Panama Canal, scheduled for completion in 2015, will give much larger Post Panamax vessels greater access to the U.S. ports on the East and Gulf coasts.

“America’s ports keep our economy moving,” said U.S. Transportation Secretary Anthony Foxx. “This study can serve as a compass to guide our port investments in the Post Panamax world so our nation’s ports can accommodate larger vessels and help maintain our global competitiveness.”

The Panama Canal Expansion Study, the first of a two-part study, found the integration of Post-Panamax vessels into U.S. trade lanes will have substantial implications for the nation’s shippers, ports and surface freight corridors, particularly along the East Coast, Gulf Coast and inland states located east of the Mississippi River, but there are still a number of factors that will determine how the Panama Canal expansion will affect U.S. trade and the cost of shipping through the Canal.

The report added that, in addition to containerized traffic from Asia which was highlighted as the most likely segment to see operational cost savings due to the expansion, more cost-effective service generated by larger vessels could improve the ability of some U.S. exports like grain, coal, petroleum products and liquefied natural gas, to compete in global markets.

The report also noted that geographic extent of the impacts of Panama Canal expansion will depend largely on how U.S. ports and inland transportation providers invest in improvements to their infrastructure, the response of shipping companies to this port and inland infrastructure development, and the adaptation of supply-chain management methods that take advantage of the scale economies offered by Canal expansion.

The report did say that shifts in shipping patterns impacting the national transportation system will occur slowly and over time.

Infrastructure investment and the development of the nation’s ports and waterways have been among President Obama’s top priorities. Since 2009, the Obama Administration has directly invested more than $400 million in infrastructure projects at 33 U.S. ports in 22 different states through the TIGER program alone, all to improve the condition, efficiency and capacity of the nation’s ports, including roads, rail and waterside corridors that connect them with producers and consumers.

This news is a total 1406 time has been read