Study: LNG as Marine Fuel not Such a Cool Choice? 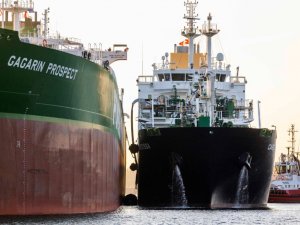 liquefied natural gas contains 25pct less carbon per unit of energy than conventional marine fuels,its use might not reduce greenhouse gas emissions on a life cycle basis, according to a study published by the International Council on Clean Transportation

The study explained that LNG being mostly methane, is a potent greenhouse gas (GHG) that traps 86 times more heat in the atmosphere than the same amount of CO2 over a 20-year time period.

“If even a small amount of methane escapes anywhere along the process of extracting it from the earth and burning it in an engine, using LNG could emit more life-cycle GHGs than conventional fuels,” the paper said.

“Over a 100-year time frame, the maximum life-cycle GHG benefit of LNG is a 15% reduction compared with MGO, and this is only if ships use a high-pressure injection dual fuel (HPDF) engine and upstream methane emissions are well-controlled. However, the latter might prove difficult as more LNG production shifts to shale gas, and given recent evidence that upstream methane leakage could be higher than previously expected. Additionally, only 90 of the more than 750 LNG-fueled ships in service or on order use HPDF engines.

“Using a 20-year GWP, which better reflects the urgency of reducing GHGs to meet the climate goals of the International Maritime Organization (IMO), and factoring in higher upstream emissions for all systems and crankcase emissions for low-pressure systems, there is no climate benefit from using LNG, regardless of the engine technology. HPDF engines using LNG emitted 4% more life-cycle GHG emissions than if they used MGO.”

The authors of the study also claims that the most popular LNG marine engine—low-pressure dual fuel (LPDF), medium-speed, four-stroke—was also the leakiest.

“The most popular LNG engine technology is low-pressure dual fuel, four-stroke, medium-speed, which is used on at least 300 ships; it is especially popular with LNG-fueled cruise ships. Results show this technology emitted 70% more life-cycle GHGs when it used LNG instead of MGO and 82% more than using MGO in a comparable medium-speed diesel (MSD) engine.”

“Given this, we conclude that using LNG does not deliver the emissions reductions required by the IMO’s initial GHG strategy, and that using it could actually worsen shipping’s climate impacts. Further, continuing to invest in LNG infrastructure on ships and on shore might make it harder to transition to low-carbon and zero-carbon fuels in the future. Investing instead in energy-saving technologies, wind-assisted propulsion, zero-emission fuels, batteries, and fuel cells would deliver both air quality and climate benefits,” the study concluded.

Organizations backing the uptake of LNG as a marine fuel, SEA-LNG and SGMF said the study lacked input from engine manufacturers, questioning the study’s assumptions and methodologies.

“We stand by the results of the Thinkstep study published in April 2019. The study has been widely recognised as the most comprehensive analysis undertaken to date on the lifecycle GHG emissions of LNG as a marine fuel compared with current and post-2020 conventional marine fuels. (…)

“With regard to assumptions – the ICCT findings are based on analysis of the 20-year global warming potential (GWP20) data, rather than the more commonly used 100-year (GWP100) metric. Whilst there are many metrics available to quantify climate change that are discussed by scientists GWP100 is considered the best practice and default metric, in part because it is compulsory for UNFCC national GHG inventory reporting.

“We note that the balance of LNG shipping numbers quoted in the study are heavily biased towards coastal vessels. Aside from existing LNG carriers, they do not include many deep-sea ocean vessels powered by large slow-speed two-stroke engines, and it is these vessels that make up most of the global fleet tonnage and offer the greatest potential for reductions in GHG emissions through the use of LNG as a marine fuel,” the joint statement reads.

This news is a total 1160 time has been read
Tags: CO2 Emissions, LNG Bunkering, SEA\LNG, SGMF.