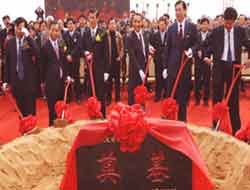 Korea's STX Shipbuilding, the world's seventh-largest shipbuilder, said Sunday (April 1) that its shipyard to be built in Dalian, China will post $3 billion in sales in 2012, similar to that of its shipyard in Jinhae, Korea.

Korea's STX Shipbuilding Co., the world's seventh-largest shipbuilder, said Sunday (April 1) that its shipyard to be built in Dalian, China will post $3 billion in sales in 2012, similar to that of its shipyard in Jinhae, Korea.

During a ground-breaking ceremony, Kang Duck-soo, chairman of STX Group, said the project to build will help the company emerge as a global shipbuilder.

"This shipyard will increase our productivity and price competitiveness by maximizing cheaper labor and land," Kang said.

The company is investing $1 billion in Dalian's Changxing Island to build the shipyard which will include production facilities, engine assembly plants, a block factory and facilities for molding and forging.

STX will complete the shipyard and block factories by the first half of next year with a first phase investment of $450 million. It expects to begin work on vessels in the second half of 2008, starting with bulkers, product tankers and automobile carriers.

So far, STX has booked orders for the Dalian yard for 25 ships worth $1.1 billion, including 21 bulk carriers of 58,000 tons capacity and four 6,700 vehicle capacity car carriers. The completed ships will be delivered from the second half of 2009.

STX Shipbuilding will be the first Korean company to build a shipyard in China. Samsung Heavy Industries and Daewoo Shipbuilding & Marine Engineering have invested in facilities for constructing ship blocks, but STX Dalian will be the first Korean-owned Chinese yard capable of building an entire vessel, through every step of the production process.

STX estimates sales from the China shipyard will reach $3 billion by 2012.

STX said its strategy would be to produce cheaper ships at the Dalian shipyard while focusing on high-value ships such as LNG carriers in Korea.

The company is downplaying concerns that the construction of overseas shipyards could have a negatives impact on Korean domestic yards and that Korean shipbuilding technology will be adopted in China, which is rapidly reducing the industry technology gap with Korea.

Kang Duck-soo says the new shipyard would actually be good for Korea.

"This will help the development of the Korean shipbuilding industry by improving market competitiveness while fully using the advantages of China," he said. What is more worrying is Korean technicians being recruited by Chinese firms, Kang said. His company will build a system to ensure that Korean technology isn't leaked to China, Korean press reports quote him as saying.

This news is a total 858 time has been read