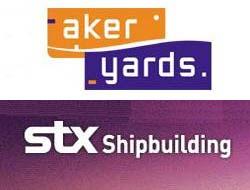 "STX emphasizes that it intends to remain as a significant minority shareholder in Aker Yards," said a statement issued today.

"As a major shareholder with a strong commitment to the shipbuilding industry, STX will endeavor to be a stable and supportive partner for Aker Yards," said the statement. "We believe Aker Yards could benefit from the support of a long-term industrial shareholder, which is committed to its success and will seek to ensure that the business continues to be run to the benefit of all stakeholders."

STX emphasizes that it intends to remain as a significant minority shareholder in Aker Yards.

STX says it will evaluate Aker Yards from a long-term industrial perspective, and reserves the right to assess available options regarding its strategic shareholding in Aker Yards in due course. During this evaluation and assessment period, STX says it will seek an ongoing and open dialogue with Aker Yards and its key stakeholders.

"Aker Yards is an accomplished and recognised leader in the shipbuilding business, and our strategic stake in the company represents a solid opportunity to gain valuable exposure to attractive industry segments," said Duk-Soo Kang, Chairman of STX.

Aker Yards ASA issued a statement saying that the Board of Directors is currently taking the new ownership information into consideration. Chairman of the Board, Svein Sivertsen commented:

"We will now gather all relevant information in order to review the strategic alternatives available in order to maximize the value of Aker Yards. The Board's main task is to consider the interest of all shareholders."

STX had $8.3 billion in revenues in 2006 and expects $11 billion in total turn-over this year. The market capitalization of the holding company, STX Corporation, is $4.2 billion.

STX Shipbuilding is a leading shipbuilding company with more than 40 years of experience in the industry and employees 6,800 persons. STX Shipbuilding designs and builds product LNG carriers, containerships, product tankers, bulk carriers, LPG and car carriers. In 2006 sales were USD 1.8 billion. The current order backlog is $13.5 billion. STX Shipbuilding is listed on the Korean Stock Exchange with a market capitalization of $5.1 billion as of Oct 19, 2007.

STX Engine is a leading diesel engine manufacturer with strong market positions in the marine, power plant and military end- markets. The company had revenues of $953 million in 2006. STX Engine is listed on the Korean Stock Exchange with a market capitalization of USD 2.3 billion as of 19 Oct 2007.

STX Pan Ocean is a global tramp shipping service provider which is listed on the stock exchange markets of Singapore and Korea. Currently STX Pan Ocean operaties 350 vessels and expanding its business activities in container and LNG carrier markets. The STX Pan Ocean had revenues of $3.6 billion in 2006. The market capitalization of STX Pan Ocean is around $ 8.4 billion.