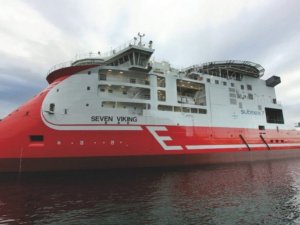 Norwegian energy giant Statoil is awarding Subsea 7 Norway AS a five-year contract for IMR services to be carried out by the Seven Viking vessel for subsea operations on the Norwegian continental shelf (NCS).

The contract has a total value of NOK 1 billion (USD $124 million), Statoil said.

“Around half of Statoil’s NCS production comes from subsea wells. Inspection, maintenance and repair on our subsea fields are key to maintain safe and efficient operations,” says Kjetil Hove, head of operations technology on the NCS.

The vessel will be reconstructed from conventional to hybrid operation, which includes installation of battery and preparations for land-based power supply. The reconstruction is scheduled to be completed when the contract takes effect on 2 January 2019.

“We are working systematically on reducing CO2 emissions from our activities. Use of vessels is central in this regard. CO2 emissions and energy efficiency are therefore evaluated when we enter into new contracts. Competitive vessels with technology solutions leading to lower consumption are prioritised,” says Pål Eitrheim, head of procurements in Statoil.

Named Nor-Shipping’s “Ship of the Year” in 2013, the Seven Viking is harsh environment IMR vessel with a crew capacity of 90 and a top speed of 17 knots. The vessel, which is co-owned by Subsea 7 and Eidesvik Offshore, previously worked worked for Statoil on a five year contract.

This news is a total 1028 time has been read
Tags: Subsea 7’s ‘Seven Viking’ Awarded New 5-Year Contract with Statoil