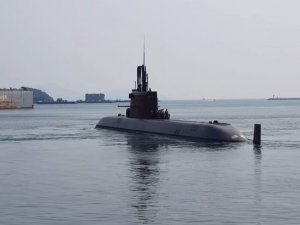 In early summer 2019, ECA GROUP successfully passed the Factory Acceptance Test of the 3rd steering and diving console for the KSS III – batch I Submarine for the Republic of Korean Navy .

As part of the KSS III – Batch I programme launched in 2014 by the ROK Navy, ECA Group was awarded the supply of Steering and Diving Console (SNDC) for 3 submarines. The delivery of this equipment started 2016 for the first submarine and continued in 2018 for the second one.

In June 2019,ECA Group alonside Hyundai Heavy Industries (HHI), in charge of the manufacturing of the remaining third submarine, successfully carried out the Factory Acceptance Test of the steering and diving console (SNDC) to be installed on the 3rd submarine. This successful collaboration confirms ECA Group capability to smoothly run projects with first-time customers.

The next steps for this programme includes:

Training – for both maintenance staff and operators

ECA Group technical expertise in providing Steering and Diving Console for submarines is acknowledged worldwide and this achievement reinforces once again ECA Group’s expertise in this field, placing it as a key player in the submarine’s industry.

For the record, DSME received a contract from the South Korean Ministry of Defense worth $ 1.56 billion to build two large conventional/diesel electric (SSK) KSS III Batch I submarines on December 26, 2012. Then, on November 30, 2016, Hyundai Heavy Industries (HHI) received a contract to build another boat of the first batch. All three boats are scheduled to be delivered by the end of 2023. In total, the plan is to introduce into the RoK Navy fleet nine KSS III submarines by 2029: Three boats of each batches (1, 2 and 3)

The Batch-II will consist in three hulls with some design changes. They will be fitted with a greater level of South Korean technology. In May 2016, DAPA selected DSME for “KSS-III Batch-II basic Design”.

KSS-III Batch 1 submarines are fitted with eight 533-mm torpedo tubes for the new Tigershark wire-guided torpedo as well as 6x VLS (vertical launch system) tubes. They would accommodate a future cruise missile (the Cheon Ryong with a range of 1,500 Km) in development by LIG Nex1 while the launchers would be provided by Doosan. It was announced earlier in the program that Spanish company INDRA was selected to provide its electronic defense system (ESM) PEGASO and Babcock of the UK would design and manufacture the Weapon Handling System for the Batch-I submarines.

Construction on first of class SS 083 ‘Dosan An Chang-Ho’ started with the first steel cutting ceremony held at the DSME shipyard in Okpo on November 27, 2014. The naming ceremony took place there on May 17, 2016. The boat was named in honor of one of the leaders of the Korean nationalist movement of the early twentieth century. The launch took place on September 14, 2018. Sea trials are ongoing.

The keel laying of the second vessel SS 085 ‘Son Byong-hi’ took place at DSME shipyard on July 1, 2016. Hyundai Heavy Industries in Ulsan started construction of the third boat and final vessel of the first batch, SS 086 ‘Yi Dongnyeong’, on June 30, 2017.