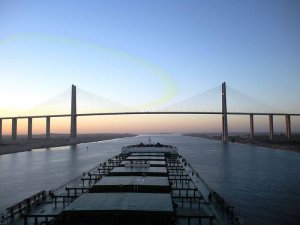 The Suez Canal Authority is offering a discount to dry bulk vessels with the aim of attracting more ships to transit the waterway.

Laden dry bulk vessels coming from ports in the East and South Australia and heading to ports in the North West Europe are to be granted 75% rebate of the full amount of Suez Canal transit tolls, the authority said in a circular.

In particular, the discount relates to ships starting their voyages at Cairns port in the East and ending at Albany Port in the South; heading to ports in the North West Europe; starting at Cadiz Port and northern ports.

In order to be eligible for the discount, the operating companies must submit a request through their shipping agencies before sailing from the origin port. The request must state: vessel’s particulars, origin port and destination port, ETA to the Suez Canal and the vessel’s condition.

As indicated, the vessel must not call any intermediate ports during its voyage between origin port and destination port for commercial purposes.

Full Suez Canal transit tolls are to be paid upon transit and the discount amount will be refunded after submitting all the required documents within one calendar year after the transit, the authority added.

The move comes on the back of the canal authority’s reduction of transit tolls for Very Large Crude Carriers (VLCCs) and boxships in the summer of 2016, all with the aim of bolstering the waterway’s traffic.

This news is a total 1057 time has been read
Tags: Suez Canal Cuts Tolls for Dry Bulkers