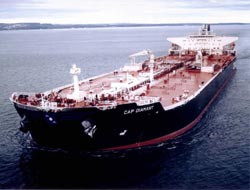 Nordic American Tanker Shipping has acquisitions under review to boost its fleet of tankers from 12 by two thirds in the next two years.

Nordic American Tanker Shipping has acquisitions under review to boost its fleet of tankers from 12 by two thirds in the next two years.

Suezmax specialist Nordic American Tanker Shipping has a warchest of $107m in cash and undrawn $500m credit facility to fuel its desire for acquisitions.

The Bermuda-based owner has acquisitions under review to boost its fleet of tankers from 12 by two thirds in the next two years.

Nordic American chairman and chief executive Herbjørn Hansson told Lloyd"s List he predicts the company would have a fleet of 20 ships before the end of 2010.

The company intends to increase the fleet through acquisitions of vessels at a time when other ship owners was struggling to secure finance.

?In the next couple of months I expect we shall increase the fleet. We could have beyond 20 ships in the next year or two,? Mr Hansson said.

?There"s financial turmoil that will be corrected, probably next year, so we shall strengthen our position.

We shall emerge more strongly than where we are now because of our strong balance sheet and operating model,? he said.

Nordic American paid $90m for the two newbuildings and $56.7m for the Nordic Sprite, which is due to join the fleet on February 18.

The first of the newbuildings ? 163,000 dwt Nordic Galaxy ? is due to be delivered in the fourth quarter of this year. The sister vessel, Nordic Vega, is set to join the fleet by May 2010. These three ships will boost Nordic American"s fleet to 15 vessels.

These have the capacity to increase Nordic American"s earnings and dividend payouts by 25%, Mr Hansson said.

?The financial turmoil represents attractive opportunities. We have further acquisitions under planning, but we are not rushing to expand,? said Mr Hansson.

?It is apparent that some shipping companies are facing challenges when it comes to financing of their large newbuilding programmes. We have a very strong position in this environment.

?We have no debt, an undrawn revolving credit facility of $500m and we received $107m in cash on January 15 from a follow-on offering of common shares.?

It reported a ten-fold increase in net income in the fourth quarter of 2008 due to higher charter rates and low bunker prices.

Nordic American said net income was $17.2m in the last quarter, compared with just $1.7m in the fourth quarter in 2007.

The quarterly income was impacted by 40 days of unplanned technical work on two of the company"s vessels.

Mr Hansson said the average daily rate for the company"s vessels on the spot market was $40,157 per day during the fourth quarter, compared with $27,322 per day in the last three months of 2007.

?Suezmax rates are maintaining satisfactory levels to date in 2009. The demand side for tankers is impacted positively by the use of tankers as storage. Market reports indicate that 35 very large crude carriers are being used for storage purposes, reducing the supply of tanker tonnage,? said Mr Hansson.

?On the supply side, it is expected that the current financial upheaval may delay deliveries of newbuildings and lead to cancellation of newbuilding orders.?

Nordic American said its average cash breakeven for the trading fleet of 12 vessels is less than $10,000 per day per vessel. Its vessel operating expenses fell in the fourth quarter to $8.6m from $9.2m in the third quarter of last year.

This news is a total 1015 time has been read