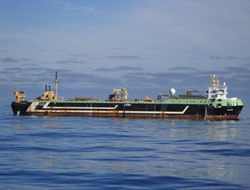 The controversial super-trawler Margiris will undergo a name change and will officially call Brisbane home, but it might not even visit the city's port.

The operator of the 142-metre factory ship, to be renamed the Abel Tasman, says it has nominated the Queensland capital in an application to have the vessel reflagged as Australian.

"However, that does not mean it will be based in Brisbane," Seafish Tasmania director Gerry Geen said in a statement on Monday.

"It may not even visit Brisbane."

Seafish had previously said the Margiris would be based at Devonport in Tasmania.

Speculation the company could abandon the idea of using a Tasmanian base was fuelled by Mr Geen at the weekend.

He described a motion in the Tasmanian parliament as "not particularly inviting to us to use Tasmanian ports".

Tasmanian Labor, Liberals and Greens combined last month to call on the federal government to provide more scientific information on the trawler's fishery.

The move came after months of opposition in Tasmania from green groups, recreational fishers and federal MP Andrew Wilkie, who instigated a complaint to be investigated by the commonwealth ombudsman.

Mr Geen said Tasmania, which Seafish has said would benefit to the tune of $10-15 million, could still figure in plans for the ship.

"The fact is that we intend to operate the vessel in the fishery stretching from the NSW-Queensland border to Western Australia and, of course, that includes Tasmania," he said.

"During operation the Abel Tasman may visit a number of ports, including Devonport as was our original plan, to offload our catch, resupply the ship and change work crews."

Mr Geen said 20 of the company's 45 Devonport employees had been flown to South Australia's Port Lincoln, where the ship is currently berthed.

He said the paperwork had been done to have the ship reflagged and renamed and, if approved, Seafish would apply to have its 18,000-tonne quota of small pelagic fish transferred to the Abel Tasman.

The ship would then leave Port Lincoln to fish in the Great Australian Bight with an Australian Fisheries Management Authority by-catch expert and a European "excluder net" expert both on board.

The decision to rename the ship - which is from the Netherlands - in honour of Dutch explorer Abel Tasman has caused anger in some quarters.

"Calling the vessel Abel Tasman would just be adding insult to injury for the hundreds of thousands of Tasmanians for whom that name has a deep connection and significance," Tasmanian Greens spokesman Kim Booth said.

"Just as a leopard cannot change its spots, this cynical use of Tasmania's namesake is ... shameless spin."

This news is a total 6327 time has been read