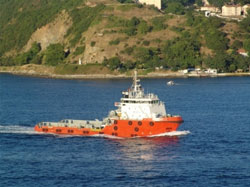 EMSA has strengthened its network of stand-by oil finalised contracts for the Black Sea and North Sea.

Grup Servicii Petroliere (GSP) will provide a pollution response capability off the coast of Romania.

The European Maritime Safety Agency (EMSA) has strengthened its network of stand-by oil finalised contracts for the Black Sea and North Sea. In the Black Sea, Romanian shipowner Grup Servicii Petroliere (GSP) will provide a pollution response capability using an offshore supply vessel which services the oilfields off the coast of Romania.

All vessels are expected to serve in the beginning of 2009

In the North Sea, Belgian shipowner DC Industrial will provide a service based on two hopper dredgers which operate in this sea area. All vessels will be pre-fitted and specially equipped for oil spill recovery activities and are expected to enter into operational service during the first half of 2009. The vessels are contracted over the next three years. ?Following another successful tender process, EMSA"s network of vessels which are available to ?top-up? Member States capabilities during a marine pollution now covers all the regional seas of Europe. Previously existing ?gaps? around the coastline have been filled,? said EMSA Executive Director Willem de Ruiter. ?I am particularly pleased that the Agency has been able to contract response capacity for the Black Sea, as this was one of the main target areas this year and was not covered previously. Three fully equipped vessels with a combined additional response capacity of 6,056 m3 and costing in the region of ? 3,5 million for three years represents good value for the Agency.?

This news is a total 1853 time has been read